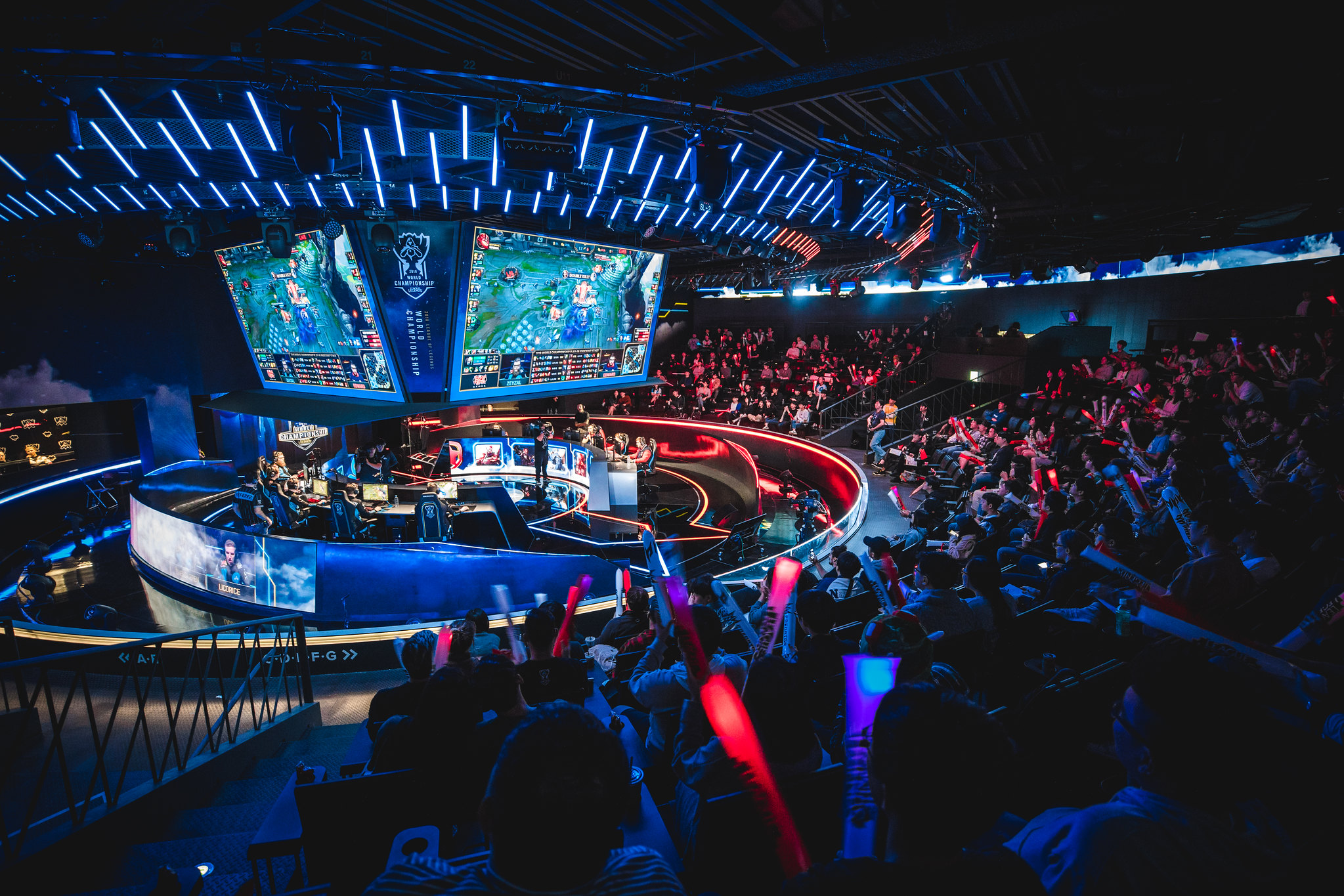 As 2021 continues to pass by, more and more eSports tournaments occur. And with it, South Korea gains recognition for their strong teams and amazing players. But have you noticed that the same few Korean teams are the ones winning? These teams are some of the biggest teams in the eSports industry for South Korea, so it makes sense that they’d be at the top of the leaderboard consistently. If you’re just getting into eSports in South Korea, feel free to check out our post about the Gaming and eSports industry in South Korea! So, let’s take a closer look at the top three Korean gaming teams currently staking claim of the top spots in tournaments.

If you’ve dabbled even slightly into the world of Korean eSports, then you’ve definitely heard of this first team. SK Telecom T1 (or T1) is one of the first few teams established in the South Korean gaming world, first appearing in 2003. Like many of the other South Korean gaming teams, T1 began as a StarCraft team.

StarCraft was the game that started it all for eSports in South Korea. It was first released in 1998 and quickly swept through the entire world. With its capability to be an individual or team game, it attracted the attention of those playing eSports. Thus, some of the top Korean gaming teams like T1 were born.

After StarCraft lost its initial fame, T1 transformed its team to fit the next movement of popular games. They started adding on players to form other teams under the T1 name. This includes: League of Legends (LoL), Fortnite, Dota 2, PlayerUnknown’s Battlegrounds (PUBG), Super Smash Bros., Hearthstone, and Apex Legends. Recently, they’ve also formed a team for Valorant.

Since their formation, T1 has kept a consistent winning pattern. Granted, they haven’t won everything. They’ve won quite a bit, though—enough to be one of the bigger teams in South Korea. In this year’s LKC Summer 2021 Tournament (which is still going on; T1 is still in the playoffs in fourth place), T1 won eleven out of eighteen of their series (that’s a total of twenty-five games won and nineteen lost).

We talked about Faker in our “Gaming and eSports Industry in Korea” blog, but we’ll need to talk about him in this one as well. Faker, Lee Sang-Hyeok, is the biggest eSports player in South Korea. There’s no ifs, ands, or buts about it. Faker is in the number one spot no matter how you look at it.

Faker made his gaming debut in 2013, when he was sixteen/seventeen years old. He was revealed on T1’s first LoL team, a time when they were considered the underdogs of the games at the time. Despite being in the “underdog” team, Faker and the rest of his team ended up in third place for that first ever tournament he participated in.

Today, Faker is not only the most well-known player in the eSports industry, he’s also the highest earned player from South Korea. At twenty-five years old, Faker has earned over $1.2 million playing LoL. And for good reason, too. He’s one of two players that has won the LoL World Championship three times—a quite difficult feat with the ever changing world of gaming.

Faker is actually one of the players from T1 that livestreams on Twitch regularly, playing LoL and interacting with fans. If you want to check out more from Faker, you can find his Twitch channel here.

As one of the strongest Hearthstone players, Surrender is a player to watch out for. He began his professional career in 2014 after the release of Hearthstone, quickly taking his spot as one of the top players of the game.

Surrender, Kim Jung-soo, joined T1 in 2018. Since his addition to the team, they’ve stayed consistently within the top ten in tournaments. And, at just twenty-five years old, he’s one of the highest earner from Hearthstone—winning just over $335 thousand so far.

Like Faker, Surrender streams regularly on Twitch. In fact, Surrender has recently been moved to the streaming team for T1. Just the other day he streamed Hearthstone for nearly nine-and-a-half hours. So he has plenty of content for you to sift through while you get familiar with his playing style. You can check out his Twitch channel here.

Since the start of 2021, T1 has participated in a few tournaments here and there. Mainly, they’ve taken part of the LCK Spring and Summer 2021 Tournaments. LCK is the League of Legends Champions Korea; it’s one of the biggest LoL competitions in South Korea. This means that a lot of big name Korean gaming teams show up here (including those on our list).

Like I mentioned earlier, T1 is still in the LCK Summer 2021 Tournament. They’re currently in fourth place with eleven series wins under them. But there’s still three more games to go, so they can’t settle yet.

Compared to T1, DAMWON Gaming is a young team. They were only established in 2017 when the computer manufacturing company Damwon acquired the gaming team Mirage Gaming. They officially rebranded to DWG KIA in January 2021 after gaining a sponsorship from KIA. Though they didn’t start off as the powerhouse team they are today, they fought tough battles from the very beginning and made their name known in the Korean gaming industry.

Like the other teams on this list, DWG KIA plays a variety of games with different teams. However, they don’t play nearly as many games as the other teams. Their primary game is LoL, but they also play PUBG, Valorant, and Rainbow Six Siege.

In recent years, DWG KIA has been racking in #1s in major tournaments. This solidified their spot in our KOrean gaming teams list. In the 2019, they won first place in the 2019 LCK Regional Finals. And in 2020, they took first place in the LCK Summer Tournament, the LCK Summer Playoffs, and the Worlds Championship. DWG KIA completely swept the tournaments in 2020 and are expected to do the same in 2021.

You can read through their website for more information about the teams.

All of DWG KIA’s first places wouldn’t be possible without their amazing players. With a few roster changes at the beginning of their formation, DWG KIA finally found a good group of players to succeed. Of course, their LoL team is one of their best, so here are a couple players to keep an eye on.

Beginning his gaming career with DWG KIA during their 2018 LoL KeSPA Cup appearance, Canyon has had enough time to perfect his skills and adhere to the needs of the teams. He’s been with the team through multiple number ones and helped the team take the top position for Korean gaming teams today.

At only twenty years old, Canyon has earned nearly $350,000 in rewards and been nominated for the MVP position in a handful of tournaments. This includes the LCK Summer 2019, the 2020 Worlds Championship, and the LCK Spring 2021 Tournament.

Another powerful player on DWG KIA’s LoL team is ShowMaker. He’s also been with the team since the start of his career, being brought in as a rookie for the 2017 LoL KeSPA Cup. He showed his skills right away for the team, having a promising future.

As predicted from their success in 2020, DWG KIA has already held an impressive track record in 2021. Though their PUBG team started off slow at the beginning of 2021, they accelerated to the top ten spots in multiple different tournaments and even took first and second place in a few of them! Their Valorant team has held a similar success rate, placing in the top ten position in every tournament. They also placed first in a few tournaments of their own.

DWG KIA’s LoL team is playing fantastically in the tournaments so far. As mentioned earlier, they took first place in the 2020 KeSPA Cup (which took place in January of 2021). They also took first place for the 2021 LCK Spring Tournament and Spring Playoffs. They’re currently holding first place for the 2021 LCK Summer Tournament with an estimation of winning from LoL watchers. They’re set up for success in the rest of 2021, so keep your eye on them!

Since their establishment in 2017, Gen.G has become the leading eSports organization that connects both the U.S. and Asia. With eight total teams under this organization, Gen.G has seven global championship wins so far.

They’re the only organization that owns and operates top esports teams around the world. This includes teams in South Korea, China, and the United States. They’ve become the talk of many eSports related things because of their strong teams, driving mission, and exceptional achievements. One of which includes being ranked the number sixth team on the Forbes “Most Valuable eSports Companies 2020.”

Like the two other Korean gaming teams, Gen.G plays a wide range of games. And doing well in each of them, to be honest. To look more into Gen.G, you can look through their website here.

Though things have been altering slightly, Gen.G is still filled to the brim with amazing players. From their top-of-the-league PUBG team, their acquired Overwatch team Seoul Dynasty, and their leading female team Bumble. There’s not a game that Gen.G hasn’t had some sort of player come out on top.

As the leading PUBG player in the eSports industry today, Gen.G has been able to hold onto player Pio—Cha Seung-hoon—since they first signed him in 2019. Though many PUBG players tend to change teams often, he’s found comfort in the team he’s gotten used to. He talks about this and similar things in an interview with Inven Global. You can read through the interview here.

At twenty-five years old, Pio is one of the leading players on Gen.G, having earned over $830 thousand in his four year career. With the team, he’s won first place in PUBG global championships and various MVP awards. At this year’s 2021 PUBG Global Invitation, Pio and the rest of his team won third place.

Starting his career back in 2016, Ruler has truly become one of the leading LoL players in the sport. He began playing on the Stardust team back in 2016, eventually moving to another strong team called Samsung Galaxy. In May of 2018, Ruler, Park Jae-hyuk, lands in Gen.G. And he’s been there ever since.

With his impressive track record—and one of the highest earnings on Gen.G’s LoL team at nearly $540 thousand—Ruler has been a constant player on the roster for tournaments. In the past couple years, Ruler and the rest of the LoL team have stayed consistently in the top five for the LCK tournaments (mostly in the top three, actually). They even beat out T1 in the LCK 2020 Regional Finals.

With just over three years on the team, Ruler has perfected to art of LoL with Gen.G, bringing the team win after win. With his help, the Gen.G team has grown to become one of the top three Korean gaming teams in the eSports industry.

Gen.G has been doing amazing this year so far for Korean gaming teams. In PUBG, they’ve recently come in third place for the PUBG Global Invitation.S 2021. Their Overwatch team, Seoul Dynasty, won second place in the NetEase Esports x Tournament 2021. Their Valorant team has consistently placed in the top five for the three tournaments in 2021 so far.

And their LoL team not only came in second for the Spring LCK 2021 Tournament, but they’re also currently holding second place for the ongoing Summer LCK 2021 Tournament. They’ve advanced to the semi-finals without having to go through extra stage seed matches! With more games to come, who’s to say Gen.G won’t win it all? Keep an eye out on them, they might surprise you!

Which of these Korean gaming teams have you been paying attention to?

With so many different tournaments going on and so many teams showing off their skills, have any of them caught your attention? From small-sized, single-game focused teams to large organizations, this list of the top Korean gaming teams in eSports has it all.