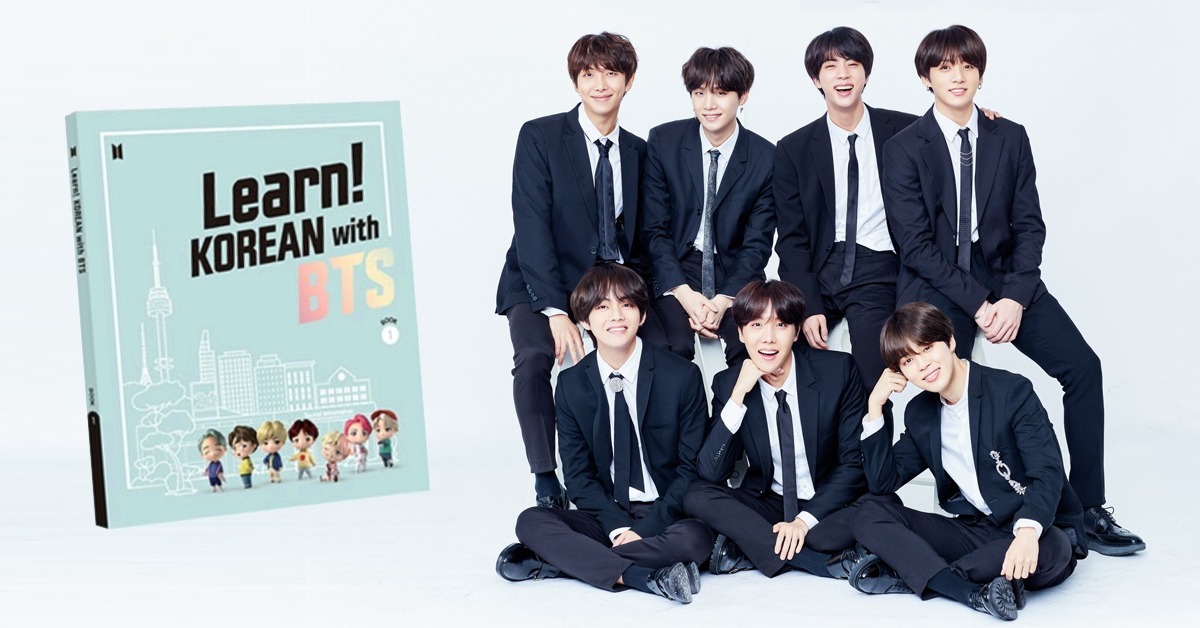 Learning a language is not easy. Sometimes we can’t afford to buy expensive study guides that really don’t help and sometimes we can’t find sources that explain that one grammar rule we can’t quite figure out. If you’ve tried to teach yourself a language, I’m sure you’ve encountered these same problems. If you’re trying to learn Korean (and are a fan of BTS), there’s something that you might want to check out: Learn! Korean with BTS.

What is Learn Korean with BTS?

As the title says, Learn Korean with BTS is something that helps you learn the Korean language with the help (and motivation) of BTS content. But, what you may not know from the title alone is that there are two different elements under the same name.

On March 24, 2020, BigHit Entertainment and BTS put out the first collection of videos under the name “Learn! Korean with BTS” on their Weverse page. On this day, they released only three videos and, since then, have released one video every Monday, all around the three-minute mark. As of mid-September, there is a total of twenty-eight episodes in this series. 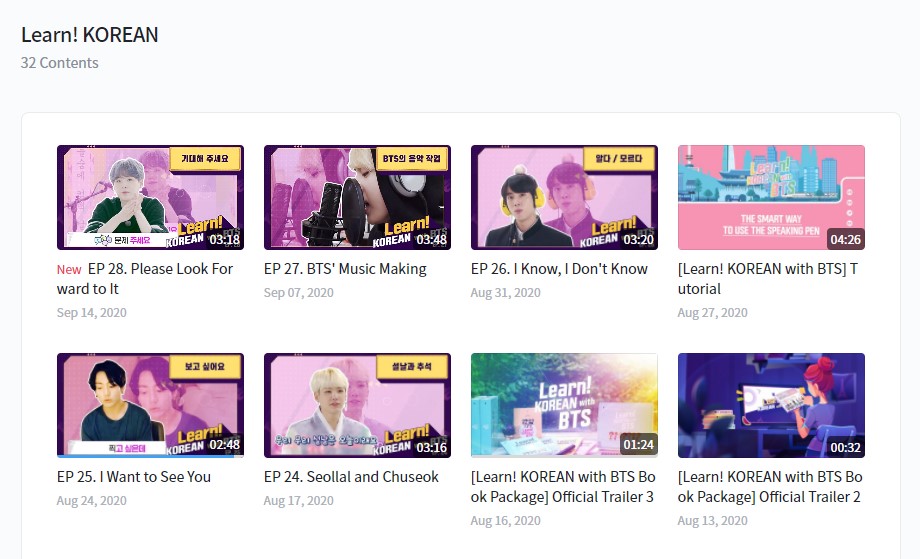 By using past videos from BTS—including Run! episodes, past V-Lives, and BangtanBombs—it creates a familiar feeling to what you’re learning. If you’re a fan of BTS, you’ve probably watched many of the videos that they use throughout the series. This, I feel, is helpful because you focus less on the video itself and more on the lesson the video is teaching.

However, I will mention a few tips on how to utilize these videos for your own learning benefit.

1. Do not only use these videos to learn Korean

While they’re nice and they can be helpful, these videos really do not teach much other than vocab. They do not focus on sentence structure and they do not explain the various ending forms to sentences either. Both are vitally important to the Korean language (and even more important to know if your native language does not follow the same rules—like English).

This is extremely important. These videos go by in the blink of an eye, including the very first video that is supposed to explain which letters are which. It really only makes sense after you’ve learned hangul on your own time, so make sure you come to these videos with at least that much planned. You can find plenty of videos on YouTube that explain it or you can find it easily by searching for it in Google. Just make sure you feel comfortable reading it and hearing it. Trust me, it will make your life so much easier when you watch these videos.

3. Watch each video more than once! (and slow it down if you have to!)

Since each video is only three minutes long, you might not catch everything that they’re trying to say. Take it slow, re-watch it as many times as you need to. Personally, I’ll watch a video all the way through—without interruptions—and then go back to watch each video clip they used as an example. Repeat what they’re saying as best as you can and replay it if you need to. There’s no set speed you have to learn this, so take your time. And don’t be afraid to jot down some notes!

In August, months after the Learn! Korean with BTS video series began, BigHit Entertainment and BTS announced that they would be releasing a Learn! Korean with BTS Book Package. In this book package, you can find a set of four workbooks, a speaking pen (and its micro USB cable), two hangul keyboard sticker sheets, and a study notebook (which is only available in the first edition, so it might not be included in your package).

One of the key, and unique, features of this package is the speaking pen. One of the more difficult parts of learning Korean comes from proper pronunciation. To counter this difficulty, this set includes a pen that you can simply touch to words and other points in each workbook to pronounce them. It also comes with audio in English, Japanese, and Spanish to help you understand some of the Korean phrases that are not translated on the page.

Within the workbooks, there are QR codes that you can scan with your phone to watch BTS videos that will either help explain the lesson, give examples, or even be the lesson itself. Sometimes, it asks you to answer questions about these videos, so make sure you’re watching them!

If you want anymore information about what’s included in the package and how everything works/looks, you can watch the Official Trailers. (Part 1, Part 2, Part 3)

Why is the Learn! Korean with BTS Book Package such a big deal? I mean, does it actually teach you Korean?

YES! This book package was not created by random people. It was created with the help of Hankuk University of Foreign Studies. Which means that this book package is not a simply made book to help you learn Korean, but it was actually made for university level learning.

While you can buy this book package on your own—without having to get it for a class—there are six universities across the world that are using these books for their university-level teaching intention. With the popularity of its release, it was announced that six universities are using a lesson plan based on the Learn! Korean with BTS book package.

The lesson plans are said to include videos much like those from the Learn! Korean with BTS video series and take place mostly online for the fall semester in 2020.

Not yet. The fall semesters have just started, so we can’t see how successful they are yet. However, there are plenty of people who’ve ordered the book package without going to one of these universities. Many have expressed how their lessons are going on Twitter through the hashtag “#Learn_Korean_with_BTS”.

Like @jjk58_twt, who shows their difference between chapter one and chapter six notes. 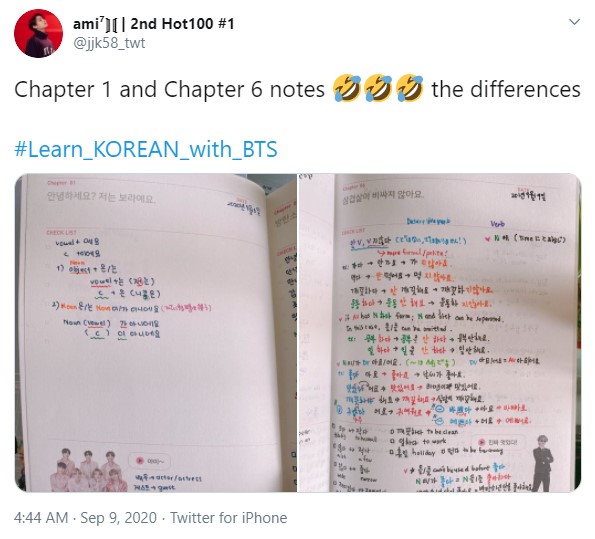 Where can you buy Learn! Korean with BTS?

Currently, the Learn! Korean with BTS book package is on pre-order (the second run for pre-order) on BTS’ Weverse shop page. Unfortunately, they don’t have a website for the Weverse shop. But, they do have an app. You can click on this link to download the app.

Where can you watch the video series?

You can watch their video series for free on their Weverse page! All you have to do is create a free account. You can find the playlist of videos here.

Yes, actually! While learning a language is fun, it can be a bit tiresome when you learn on your own. I speak from personal experience. I had more fun learning a language in a class of others learning the same language than I did self-teaching myself a language. If you work better by yourself, then by all means, study your little heart out!

But, if you do better learning with others, you don’t need to fly off to one of the six universities teaching a Korean course with the Learn! Korean with BTS book package. Instead, if you find yourself buying the package for yourself, you can join the many others using it to learn Korean on the Twitter hashtag “#Learn_Korean_with_BTS”. In this hashtag, you’ll be able to find many people who have created Discords/Chatrooms where they help each other through each lesson. For free, too! Even if you don’t find a chatroom of people to join, you’ll be able to find someone else who is using it to learn. And from there, you both can help each other!

Hopefully, this helps with your Korean learning adventure! It’s not so scary once you get started, so the best of luck! If you want to check out more we’ve written about all things Korean, you can check out our Blog page! There are tons of posts to help you fully understand the culture and possibly places to use your newly learned Korean!

Tags:
Previous Article
Why K-pop Music Videos Are Better
Next Article
Chuseok holiday: What you should know about it

Keopiuyu, or Korean Coffee Milk, is just coffee in

Nami Island (Namiseom) is a beautiful place to see

To start 2021 off right, we are now sharing monthl

Aegyo sal has been a staple in the world of Korean

Gradient lips have been a common trend in the worl