Though you’ll see couple outfits—or pair outfits for those who are not a couple—around the world, they’ve always been deemed a bit more cliché and cheesy. Most commonly, you’ll find parents who have dressed their children in similar outfits or groups of people wearing the same clothes for an event/special occasion. In South Korea, though, wearing couple outfits is just another part of their culture. It’s not cheesy or cliché (most of the time), but it’s something to show you’re happily in a relationship.

Like with everything, though, there are various ways to dress up in what can be considered couple outfits. From matching colors to matching statement shirts, here are five types of couple outfits you’re most likely to see in South Korea.

Couple Outfits in South Korea: How Big is the Couples Look?

Before we get too far into the types of couple outfits, we should address the culture behind them. 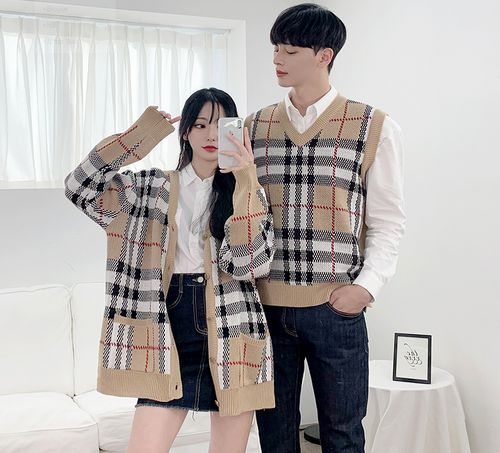 It’s already pretty well-known that relationships are highly thought of in Korea. With the multitude of celebrations most couples do—including, but not limited to, their 100 days celebration, 1000 days, Valentine’s Day (where the girls give to the boys), White Day (where the boys give to the girls), and even more—it’s hard not to place an importance on something so abundantly celebrated.

Some attribute this high importance to the pressures many experience in Korea. Whether those pressures are from society or their own parents, many say that they feel pressured to find a perfect partner. And once they do, it makes sense that they’ll want to show them off. The best way to do that? By wearing matching outfits, of course!

But why couple outfits? Why not something else?

There are tons of ways to show that you’re in a relationship, even if you’ve just started, so why did Korea turn more to wearing couple outfits?

Though there’s no set answer, some have guessed that it has to do with Korea’s clothing culture. Years ago, there was a typical attire for newlyweds: a suit for the men and a hanbok for the women. Because it was typical attire, it visually showed to anyone who saw them that they got married. Eventually, newlyweds seemed to change direction and chose coordinating outfits to show off their new marriage instead. Eventually, this style started appearing in the earlier stages of people’s relationships. 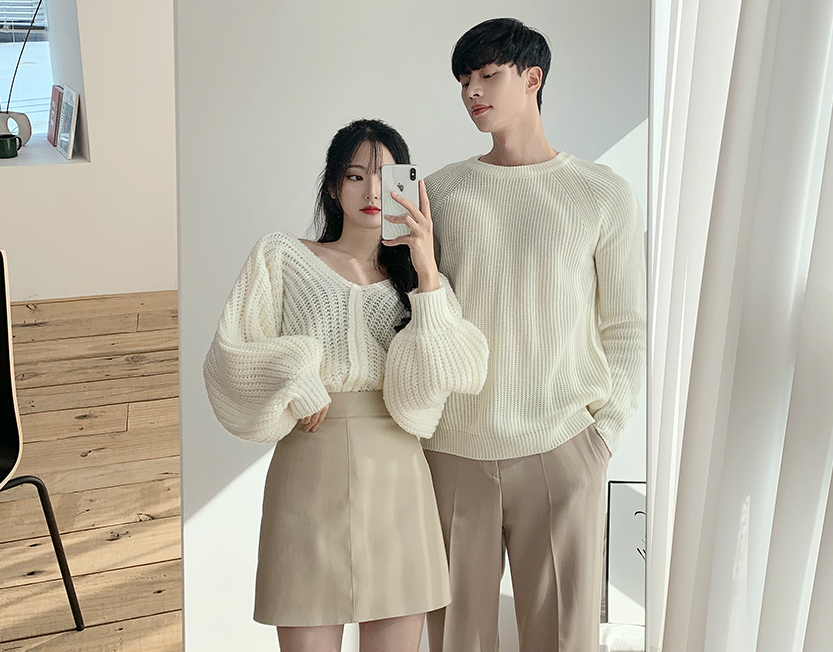 With the popularity of the couple look throughout social media—particularly in specific tags on media-based social accounts and trends that involve couples—the couple look became the to-do for most. It was not only a way to show that you’re in a relationship, but it was a way to get closer with your partner.

If you take that into consideration, the idea of wearing couple outfits sounds a bit more romantic, doesn’t it?

Though couple outfits can be quite literally anything you want them to be (within the guidelines that they match somehow—whether that’s from colors, brands, patterns, buying them together, etc.), there are a few repeating types of couple outfits you’ll see in South Korea.

Here are the five most common couple outfits you might want to try for yourself.

Probably the most popular way to design the couples look comes from the color. Whether that’s wearing the same colored outfit head-to-toe, wearing the same color for a statement piece, or wearing an outfit with coordinating colors with your partner (meaning they wear a black top and white bottoms while you wear a white top and black bottoms, or something similar to this), this is one of the best ways to show your couple status.

Another popular style of couple outfits is wearing similar fabric. Perhaps the couple both wear denim, either with one piece of their outfit or their entire outfit.

Similarly, many couples tend to wear the same clothes in different ways. For example, if you get a shirt big enough, the guy can wear the shirt regularly and the girl can wear the shirt as a dress. Of course, there are plenty of other styles and choices for this! Perhaps the couple has the same bag, but one wears it cross-body style and the other just holds it. The possibilities with these couple outfits are limitless.

This one actually has the most freedom for couple outfits because it can go further than just the clothes you wear. Many couples tend to get matching jewelry, matching shoes, matching bags, and more. There’s no limit to wearing matching pieces.

The most popular item of clothing to match in couple outfits are jackets. More particularly, hoodies! There’s something adorable about wearing the same hoodie as your partner. Not only are there plenty of “couple hoodie” sets out there, but they’re comfortable and can fit most outfits you choose to wear with them. 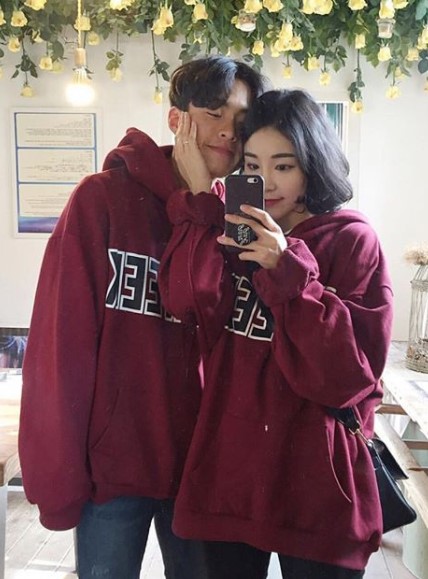 Alongside matching staple pieces, it’s also quite common for Korean couples to wear matching patterns. (Stripes are one of the most common patterns you’ll see!) 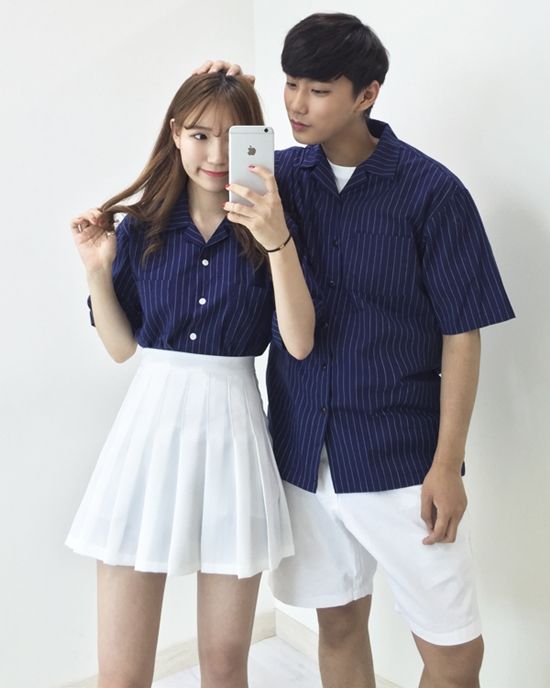 Because patterns can be quite bold and stand out, these items of clothing tend to be particular staple pieces for the couple. And because of that, this style of couple outfits can be combined with any of the previously ones we’ve already mentioned. Coordinate colors? What about coordinating stripes? Wearing the same clothes? Sure! How about wearing the same Hawaiian-themed shirt?

There are endless possibilities with wearing the same pattern as your partner.

Lastly, but certainly not least on our list of styles for couple outfits, there’s always the classic matching statement shirts.

Although these tend to be more on the cliché and cringey side for most couples, these statement shirts definitely do the job of telling people you’re with someone. (Quite literally, too.) 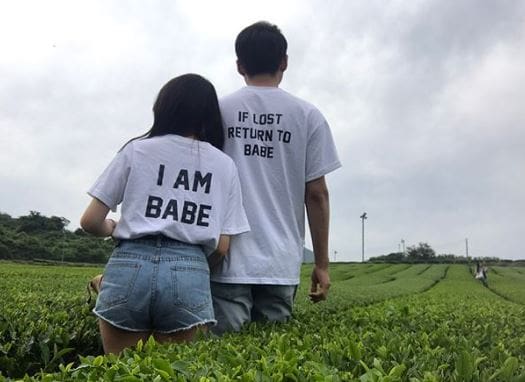 These shirts—or other tops, jackets, hoodies, etc.—are most noticeable with their simple designs and bold text. They usually say something along the lines of “If lost, return to Her/Him/Babe” and “I am Her/Him/Babe.” Sometimes you’ll find some that say “I’m Hers/His” with a giant arrow pointing to the left or right (of course, these require you to ensure your partner is standing on the correct side of the arrow).

While a bit cheesy, many couples like the boldness of these couple outfits. It’s not a guess that they’re dating the person with them. It’s also less of a hassle compared to coordinating patterns or colors if you and your partner don’t have the exact same clothing items.

Because couple outfits are very much ingrained into the Korean culture, you’ll spot them in a lot of different romance K-dramas. From simple color coordination to fully matching outfits, there are plenty of examples to choose from.

Kicking off the K-drama examples of couple outfits, we have two dramas that showed their main leads’ romances with matching shoes!

Released in 2013, we have the widely known K-drama The Heirs (also known as The Inheritors). In episode sixteen, the two main leads—Eun-sang and Kim Tan—are seen wearing matching pink couple shoes!

The second drama, released in 2020 on Netflix, is Record of Youth. As the drama winds down, the male lead Sa Hye-jun is shown painting two pairs of shoes. One for himself and one for the female lead, Ahn Jeong-ha.

Both of these dramas show us just how adorable it is to match shoes with your partner.

As mentioned earlier, one of the more popular clothes couples match are hoodies. In the 2018 K-drama My ID is Gangnam Beauty, the two main leads—Mi-rae and Kyung-seok—show off their relationship during the last episode by wearing matching hoodies (and clothes) for the first time.

With the reactions of everyone around them, you can see how telling it is for them to wear matching hoodies. It’s adorable, heartwarming, and exactly what this couple needed after everything they’d gone through.

Unlike the previously mentioned K-dramas, these next two take couple outfits even further. Instead of having one or two similar pieces, they match the entire outfits of their main leads.

In the 2016 K-drama W, main leads Kang Cheol and Oh Yeon-joo sport matching couple outfits in episode thirteen. They wear the same white shoes, blue jeans, and pink sweaters while they’re out on their date.

And in the 2019 K-drama Her Private Life, main leads Ryan Gold and Sung Deok-mi wear the same outfits on their first “date” in episode four. They both wear long trench coats (his beige and hers white), white shirts, blue jeans, and color-coordinated shoes (his white and hers beige).

Both of these dramas show what it means to be truly decked out in couple outfits, taking into account many of the styles we’ve mentioned—similar colors, similar staple pieces, and wearing the same clothes in different ways.

Unlike the last two dramas mentioned, this drama focuses only on color to match for these couple outfits. The 2021 K-drama Nevertheless came packed full of couples (and not couple couples). To make up for the multitude of cast and the various relationships, they had to get creative with showing who was with who.

Though they coordinated somewhat beforehand, by the end of the drama Sol and Ji-wan’s clothes start matching quite noticeably. In episode nine, where they’re talking about their feelings, Sol and Ji-wan both sport the light brown/tan color.

And if you’re looking for another example of the color couple outfits from Nevertheless, then you don’t have to look far. Also in episode nine, as Bitna and Kyuhyun finally have a conversation, you might notice that they’re wearing a similar shade of green.

If you started off reading this article feeling that couple outfits were a thing only for cheesy and overly cliché couples, have you changed your mind? Of course, K-dramas romanticize the idea even further, but the culture behind sharing similar clothing with your partner makes it seem kind of special. Like an adorable sort of connection you can have with your partner.

If you want to check out any other interesting things about Korean Culture, feel free to check out our Culture Category. And if any of the K-dramas we mentioned piqued your interest, we’ve written plenty of blogs about them! You can scroll through our K-Drama Category and find even more about them as well as other K-dramas.