Korean Tea Culture: An Experience with Our Five Senses 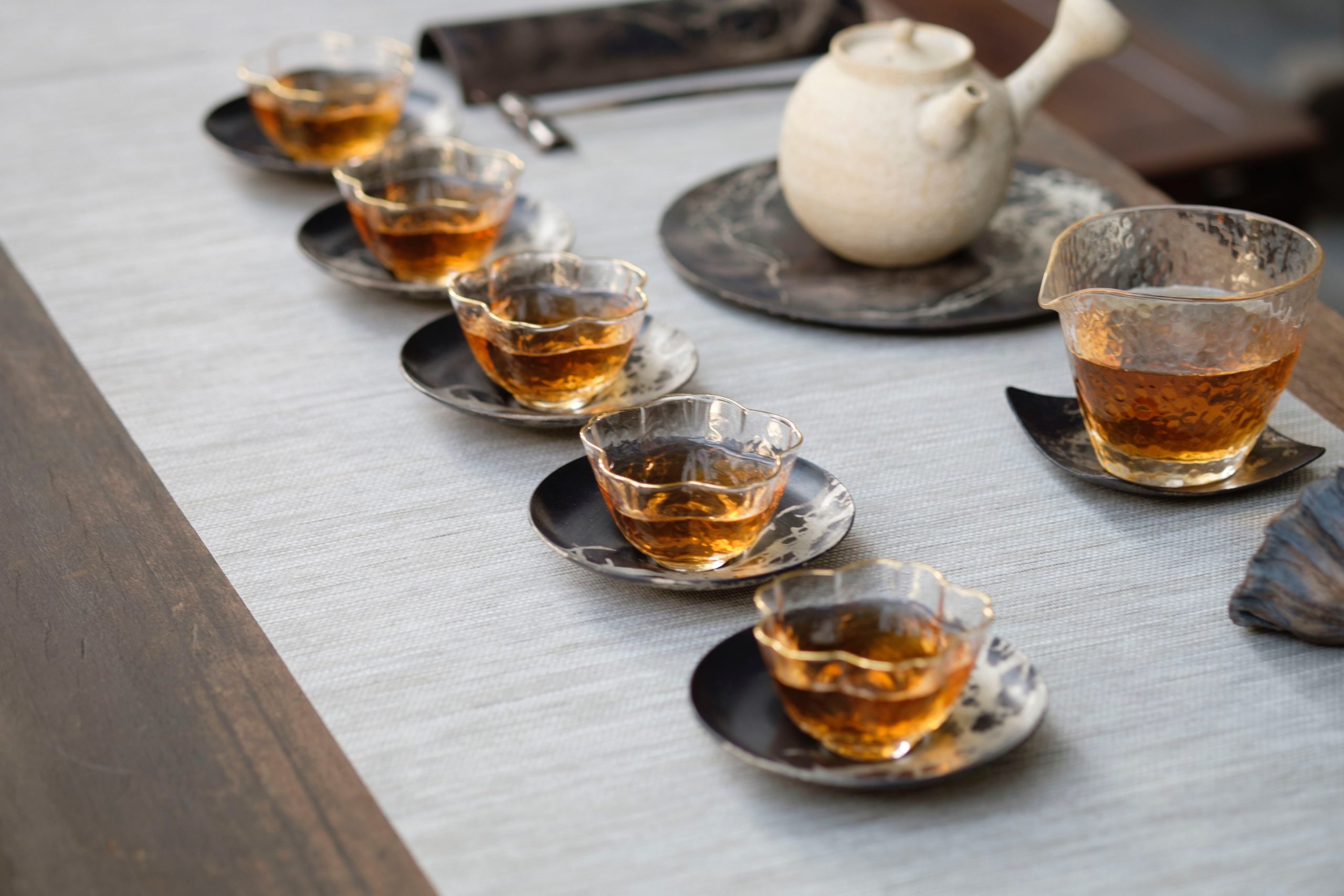 Tea culture has been known to be a part of China’s and Japan’s cultural customs. Even Ireland and the United Kingdom are known to be countries where tea has been customary to drink.

But so has South Korea!

Although South Korea may not be known for their tea culture, it does exist. Korean tea culture has a long history that helped develop and shape their tea customs. Like China and Japan, Koreans have their own tea culture style deriving from its neighboring countries.

Like most cultural customs, there has been history shaping their customs to what they are today. Korean’s history has influenced much of the tea culture they developed over the years and what it has become now.

So, how has their history shaped their tea customs?

Korean history spans over thousands of years and within that spectrum of political and social change, tea customs changed as well. With new governance over Korea’s peninsula, new customs have been switch and brought. 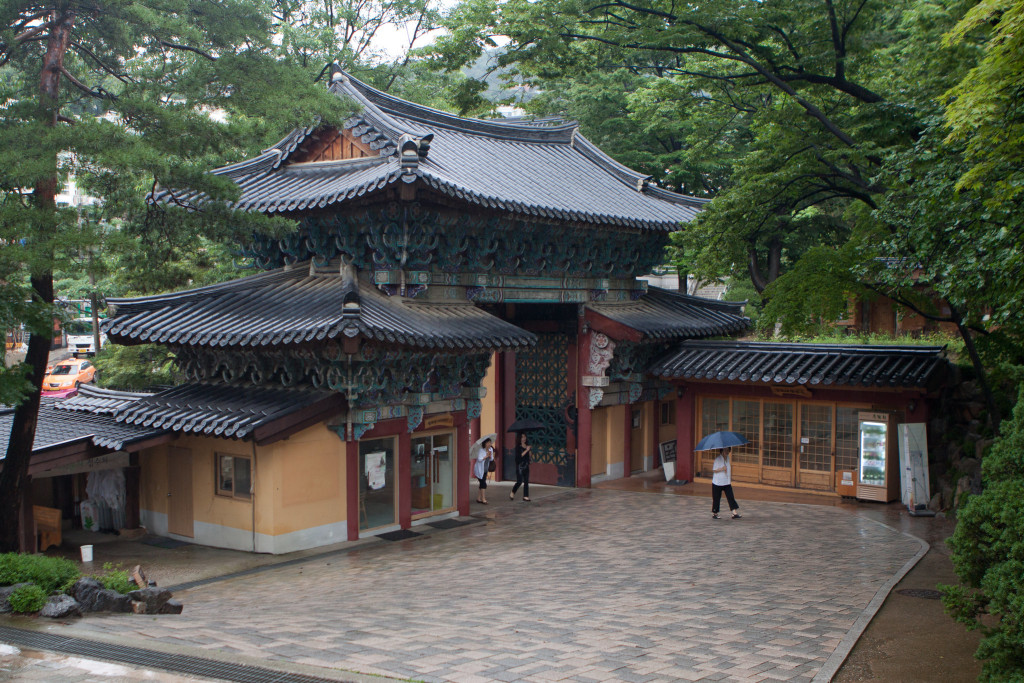 Although the origin of tea in Korea has been vague, one thing has been certain that tea has remained part of the buddhists customs and sacred to their temples. During the Silla Dynasty (57 BCE – 935) tea has been reserve for the upper society and the monks who worship Buddha. During this time, tea became a refined art of drinking in many ways and introduced tea cultivation to Mt. Jiri. Tea had its use as a form of medicine too during this period.

Also known as the Goryeo Dynasty, the first period tea culture flourished beyond the upper society, aristocrats, and monks to society as a whole. Each class had their own attitude for drinking tea. For the upper class, tea drinking was a form of respect. The monks drank tea as a form of mediation. However, the tea culture set in the Koryo Dynasty shifted.

The Joseon Dynasty (also referred to as Choson Dynasty) marked a shift in tea culture and customs common only for the royalty during formal settings and for commoners during Jesa, part of the Charye ceremony for the anniversary of their dead ancestors held every season. The monks used tea for zen and to worship their ancestors done in the temples. Despite the use of tea in formal settings or ancestral worship, the new dynasty discouraged buddhism replacing it with Confucism.

With Confucian rites being put into place, tea culture along with the philosophy dwindling. The monasteries became the place where tea remained custom, but it would soon decline. However, tea would resurface again.

At the end of the 16th century and during the Japanese occupation, tea declined and replaced with wine as a formal drink used in ceremonies. Although, with the Japanese invasion, tea slowly began to make a comeback.

Even though tea culture began to come back, the Japanese were implementing their style and customs to the younger generation. Teaching them their tea ceremony with the spirit of Japan and their culture helped shape a new tea culture in Korea. But it would not last long, tea culture would collapse after the disruption caused by the Korean War.

Revival of Tea Culture in Korea

The tea culture in Korea struggled to survive along with its industry due to the hardships of the war and destruction. Despite all that, tea has managed to find its way back to current Korean culture.

Not into fairly recently, 1970, did tea masters begin to revive the interest of tea through giving lectures, publishing and conducting classes on Dado (the Korean way of tea). At this time, educating others on tea and the way of tea helped spark interest in other tea drinkers which led to the growth of tea plantations.

But what place does tea have in Korea now?

As Koreans embrace the coffee culture, Korea has become one of the top consumers of coffee placing competition at an all high. According to the Diplomat, sales at the coffee shops raised to 4.3 billion dollars last year with an estimate of each adult consuming “353 cups of coffee a year”.

With coffee consumption going up, tea consumption began to lower but that is not to say it has lost its taste. On the contrary, tea still sells and holds the a similar experience as before.

Tea has become a drink to seek relaxation and solace due to stress factors placed on them or pressure of society. It has become a remedy to drink from stress and seek calmness.  Tea was once used for their medicine properties and it has not changed, since there are tea consumers who drink teas for their health benefits.

As tea becomes a drink of consumption, the traditional ceremonies have emerge and taught in certain places.

Over Korean history, many tea ceremonies unique to Korean culture have sadly been lost due to political and cultural disturbance. Despite the loss of their old tea culture, there have been rediscovers in the writings of the monks who would write about tea.

Darye, translated to “etiquette for tea” or “tea rite”, has been one of the longest tea ceremonies of Korea. Darye was a tea ceremony for an offering to the gods but, also, their ancestors or to well loved monks. It was a ceremony connecting and harmonizing with the living and the dead.

During the Joseon Dynasty, there were many ceremonies that became part of Korrean culture. One of those ceremonies was known as the “Special Tea Rite” which was reserved for special occasions.

Another ceremony which has become part of Korean culture now has been the Jesa. Jesa emcompasses a ceremony in commemoration of the dead. There are three ceremonies that fall under the Jesa: Charye, Gijesa, and Sije. Ancestral rituals divided into three categories taking place at different times of the year, seasons, or death anniversary of a loved one.

The eldest son of the family performs the Jesa ceremony. It has been a way of honoring their family from generation to generation for the paths they have paved for their families. Only the male heir can hold the Jesa, so if a family had daughters they would honor their husband’s family.

Jesa continues to be practiced in current Korean culture. But aside from the Jesa, a new modernized Darye has taken place.

Aforementioned, the Darye has been one of the longest tea ceremonies in Korean culture that became modernized by Hyo Dang. He was the person to restore tea in the 20th century by publishing a book called The Korean Way of Tea.

Hyo Dang’s book describes a natural tea ceremony style where it has become a ritual of purification and fortification for the tea maker and drinker to express enjoyment and gratitude. Preparing and drinking the tea has been an art of its own to find enjoyment in the simplicity of life. Tea drinking has been an experience and continues to be an experience.

In his book, Hyo-Dang details the method of brewing Panyaro (green tea) for the everyday tea drinker. Panyro marks a modernized Darye ceremony of what has become a simplified ritual. Darye was a tea ceremony sacred to the Buddhists for the purpose of simplicity that it has now become a tea ceremony seeking relaxation to the mind and body aside from the taste sensation.

Panyaro has become a popular drink among the younger and older generation including the Panyaro tea ceremony (modern day Darye). Like most tea ceremonies in Korea, there are customs and utensils used during the Darye (whether old or modern custom).

Darye has been a traditional tea ceremony, therefore, we can expect certain equipment and customs to be in use.

Different pot materials used depends on the person who performs it and the time of year. Pots made of metalware or ceramics are common, however, ceramics have been the most popular to this day. The ceramics used have natural color tones close to earth tones.

The Darye has been performed using the lower table with all the tea equipment placed on the table in an order fashion dependent on the province. The table will have a cloth over it. There will be the teapot, the handleless cups, a cooling bowl, a scoop and spoon, the kettle, and a waste bowl.

We can’t forget the tea. The Darye ceremony uses Korean green tea known as Panyaro tea. Thanks to Hyo-Dang, he has managed to help the regrowth and production of tea in Korea. Like the art of growing tea, preparing and drinking has been an art we experience. Through the process of drinking the tea we are evoking our senses from our smell, taste, to clearing the mind.

Drinking tea has been a ceremony where we find solace and zen with our mind and body, even our spirit.

The Darye ceremony uses traditional clothing, the hanbok. Both the hostess and the guests wear the hanbok as they sit themselves around the low table.As a side note, we don’t need to wear a hanbok if we are getting tea in a cafe or restaurant since it’s not ceremonial.

As mentioned, tea drinking has been an art form. The first pour fills the cup half 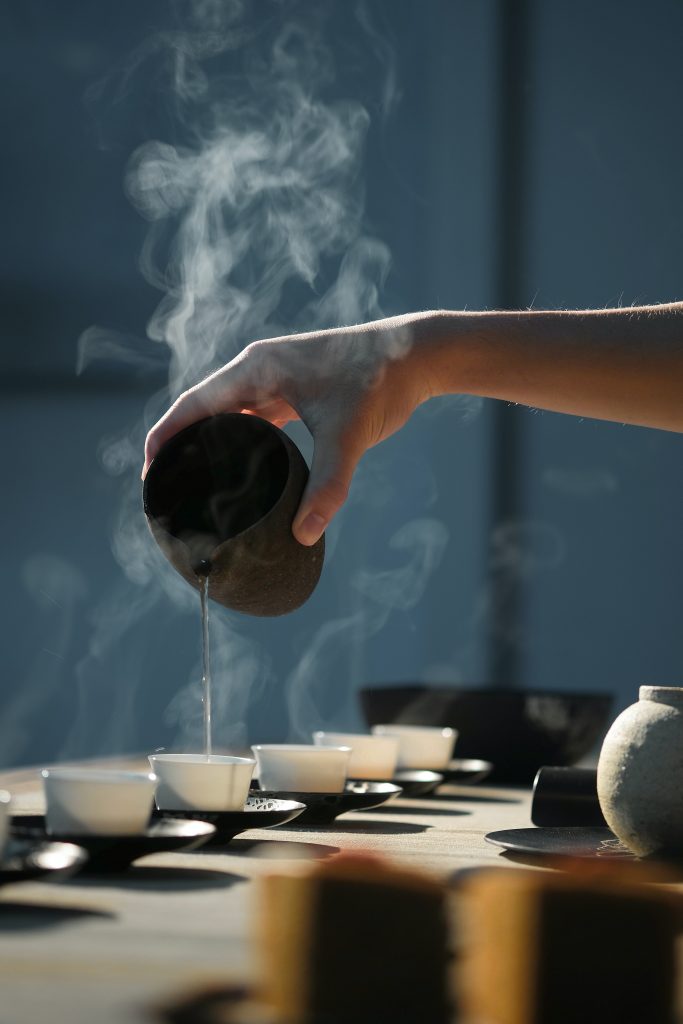 way through before circling around to fill it three-fourths of the way to ensure an equal taste. Once all the guests have their tea poured, the experience begins.

One thing to note, tea has been consume in sips. With each sip, we are to focus on something different from the tea and the experience that comes from each sip. On the first sip, the focus has been on the color of the tea while inhaling the aroma. The second sip we focus on tasting the tea and the fragrance. On the final sip, we enjoy and focus on the aftertaste the tea leaves in our mouths.

Through these three sips, we want to practice inhaling the aroma while focusing on clearing our minds. After all, it has been a ceremony of reaching zen with our mind and body as we drink.

Depending on the experience we are looking to have, there are a couple of places we can go to in Korea to experience their tea ceremony and culture.

For a more traditional tea ceremony experience, we want to embrace going to institutions or regions where tea plantations are to explore and learn more about their tea ceremony and how they grow their tea. We can go to But if we want to have a more casual outing for tea without the traditional customs or attire. Check out Suyeonsanbang Tea House located in Seongbuk-gu Seoul.

Korea has a long history of tea culture and customs that has been lost, however, with time it has made its way to modern Korean culture. Tea has become a sacred ritual to the monks and part of connecting with the living and the dead.

With tea culture making a comeback, there are many places we can experience the traditional setting of a tea ceremony to a more casual tea drinking experience to find the solace we need from the pressures of life.

What experience would you be willing to try?