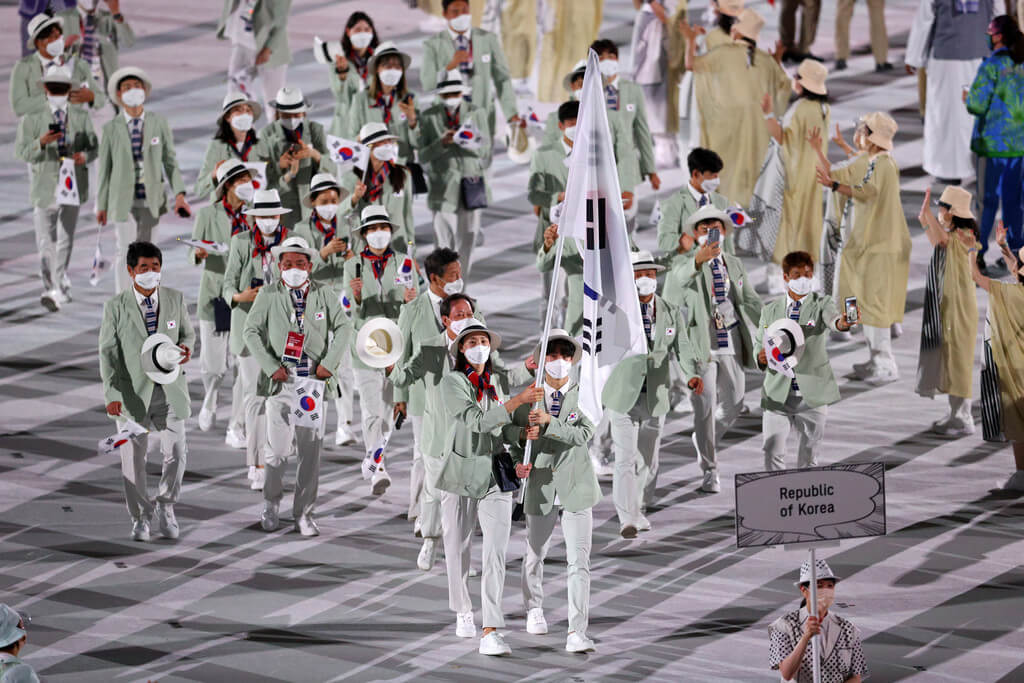 The gigantic flag of South Korea flutters in the wind as two of their finest athletes, Kim Yeon-koung and Hwang Sun-woo, carry it and march across the stadium with joy and pride — marking the (much long-overdue) official commencement of Olympics 2020 in 2021.

In case you’ve been living in a cave for the past year, because of the COVID-19 pandemic’s serverity, the Olympics 2020 has been postponed to July this year (23/7-8/8). 236 big-athletic-guns from team Republic of Korea will be competing in 29 events this year, being their 18th year of participation in Summer Olympics.

Team Republic of Korea in Olympics 2020

“I’m really happy to take a gold medal,” cried out 17-year-old Kim Je Deouk as quoted and reported in the official website of International Olympic Committee (IOC). Team Republic of Korea never disappoints when it comes to their outstanding archery’s combat record over the century, including this year. The pairing of Je Deouk and An San has kick-started the year off well by bringing home their first gold medal in the mixed team archery event on the very first day. If that isn’t impressive enough, the 20-year-old An San has also broken the women’s archery record by scoring 680 points out of 720. You go girl!

All Eyes On Them : Star Korean Athletes

Over the years, athletes from the South Korean team have brought home hundreds of medals. Here are a few who stand out and we hold high hopes for in Olympics 2020:

Yeon-Koung, one of the flag bearers of this year’s Olympics, came forth in the 2012 Olympics. She is crowned as the best volleyball player ever in South Korea by winning the most awards in V-league history – gaining the nickname Volleyball Empress. Not only that, she is also named the Most Valuable Player in multiple occasions. The Wing spiker professes her ultimate dream in conquering the championship in Olympics 2020.

Golden golfer Park has ranked top 5 for six times in the Women’s World Golf Rankings, in which she came first in two of them. She also won her first Olympic gold medal in 2016, on top of being a 21-time LPGA winner – putting her on the Hall of Fame.

Being only a highschooler and a first-time olympian, Je-deok won the first gold medal for team Republic of Korea on the first day of this year’s Olympics, completing his dream of being a world champion. He is also the youngest archer ever to win a gold medal in Korea’s Olympic history.

Another archer that we need to look out for, Chae-young (aka “the Destroyer”) has gained the love and admiration from the public as being the first woman archer to break 690 points for the 72-arrow 70-metre qualifying round in the World Archery Championship. Together with An San and Jang Minhee, they triumphed over other women’s archery teams and brought home a gold medal.

“If somebody says fencing, I want to be the person that immediately comes to mind.” – says three-time team world champion, Sang-uk. Needless to say his dream comes true by ranking number one in the world of sabre fencers. Being his first time playing in the Olympics, his goal is to win the individual and team gold medals.

The Artistic Gymnast Hak-seon, aka the God of Vault, is the first Korean olympian to win the Gymnastic gold medal. His return this year, after the recovery of his hamstring, has put him under the spotlight. Everyone is waiting to see if he will claim another gold medal in vault this year for South Korea.

Four-time individual shooting champion Jong-oh, nicknamed the “terminator” and “God of Shooting”, is the world record holder of both 10 metre air pistol and 50 metre pistol. He has also participated in five Olympic Games, including this one, ranking first in both 10 and 50 metre pistol in the 2012 game.

Past Accomplishment : Medals and Awards

South Korea made their first appearance at the 1948 Olympic Games in London. Before Olympics 2020, they have participated in almost every Summer and Winter Games (apart from the 1952 and 1980 Games). Looking into these games, team Republic of Korea has won a total of 121 gold medals, 112 silver medals, and 104 bronze medals (not including Olympics 2020). They rank an average of 15 among all the other participating nations.

What are their leading sports?

As we can all see from the glorious record the archers in the team Republic of Korea have set throughout the years, it is without-a-doubt South Korea’s leading sport. They have won a total of 39 medals in the previous Olympic Games, in which 23 are gold medals. Apart from archery, they have also done a fantastic job in Taekwondo – being a sport originated from South Korea. Taekwondo athletes from team Republic of Korea have claimed a total of 19 medals, more than half of those are gold. Whereas in Winter sports, South Korea has kept a remarkable record in short track speed skating by winning 48 medals overall.

During the time of political and economical turbulence, South Korea was, unexpectedly, chosen to be the host for the 1988 Summer Olympics. Having just gone through the Korean War in 1950, they still had not fully recovered from it and were picking up the pieces. On top of that, South Korea was not internationally known at that time. Therefore, it came as a surprise to the world as they were announced as the host of the games. However, this game turned out to be a huge success and a major turning point for South Korea.

What is so special about it?

The song setting off the festival is “Hand in Hand” by Koreana. It represents South Korea’s peaceful and harmonized image perfectly. South Korea has also put in a lot of work into their artistic displays and demonstrations in Olympics 1988, making them the most fascinating and monumental as compared to the other Olympics.

What is the influence Olympics 1988 has on South Korea?

Olympics 1988 not only has helped Korea gain international recognition; but also has connected and empowered South Koreans as a whole. It definitely was a significant and life-changing moment for South Korea, as it permanently and positively changed and shaped the future of this nation.

Thirty years later, South Korea was selected to be the host for the games once again.

What is so special about it?

The 2018 Olympics had the most internet coverage out of all the previous games. It had over 3 billion views on online platforms with viewers accounting for nearly 30% of the world population.

What is the influence Olympics 2018 has on South Korea?

The Olympic Game was described as a “resounding success” by the IOC, despite being held during another difficult time for South Korea. This Olympics has soften the tension between North and South Korea as they joined hands to march under the same flag and compete in the games as a united force – shedding light on the hope of unity between two countries. In the Game, Korean cultures are also showcased throughout the Event, such as having members of EXO perform at the opening ceremony. Everyone had learned a little more about Korea after watching the Olympics.

*Year 2018: conflict between North Korea and the United States.

What are you most excited for in Olympics 2020?

Cycling? Canoeing? Sport Climbing? Or are you just here for the pretty athletes? No matter what, after a year of chaos, I’m sure this year’s Olympics is just the thing we need to bring our spirits back up again! Go Teams!

If you’re interested in knowing more about what’s happening with South Korea in the Olympics or just about Korean culture in general, feel free to check out our Blog Page or watch the video below!

6 Talented Korean Female Solo Artists to Keep Your Eye On