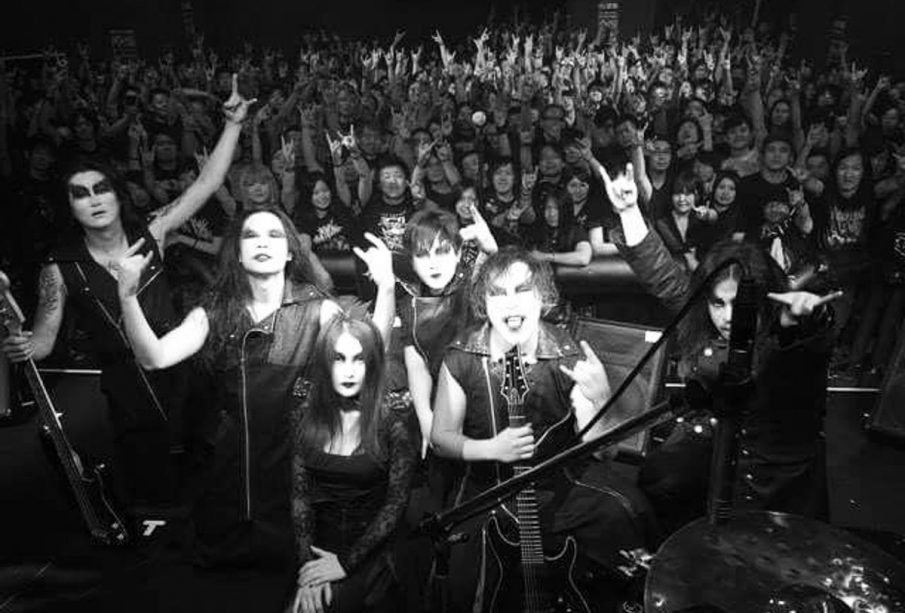 The South Korean entertainment industry has definitely taken the world by storm, especially for K-pop. We are all going crazy over their catchy lyrics, banging music, sleek dance moves, and not to mention, the pretty faces. However, did you know that other than K-pop, South Korea also does an equally incredible job in other music genres? Korean metal is one of them. Of course, South Korea is still pretty barren when it comes to metal music. But there are still many killer, mental Korean metal bands! Let me show you the world of Korean metal by introducing five of South Korea’s very own impressive metal bands!

Quickly after that, they launched a 3-track EP in late September 2015. They released their first full-length album Live In Hope on April 16, 2017. The rest is history.

Before forming the band, Gyejin, Junyong, and Daegun were already really great friends in middle school. They discovered their love for rock music at school and fell in love with rock legends like Linkin Park. The next thing they knew was deciding to form a rock band of their own. Hwanhee and Taehee joined later on, and “Burstered ” was borned. The reason why they chose this name was because they want their music to be “explosive” – meaning that they want their music to make an impact on their listeners and the music industry.

The five-piece made their first ever appearance on a Korean TV show called “Superstar K” in 2014.

“We were hungry for it, for this opportunity to show our music.” – Bursters, 2019

Amid all the other gifted musicians, Bursters became the pioneer, out of all the other heavy metal bands who have previously participated in “Superstar K”, to have made their way into the final six. They got signed to Evermore Entertainment right away.

With their powerful vocal and drifting metal guitar riffs, Bursters’s first album, Live In Hope, got critically and commercially acclaimed by Burrn, which is a monthly, heavy metal Japanese magazine. They believed it was one of the most auspicious albums of the year.

What’s So Special About Them?

Even though their music could be categorized into the heavy metal/ alternative rock genre, Bursters do not always stick to one genre. Their songs also focus on serious issues like how their 2019 single, Barriers, features discrimination and capitalism problems.They want to express their feelings and thoughts through these songs and raise awareness.

After having a UK tour in Summer 2019: K-Rock Revelation, Bursters do not have any upcoming tours or new songs/albums at the moment. Though, a documentary of that 2019 tour – <K-ROCK REVELATION : UK TOUR> – is now available on Bursters’ official YouTube channel!

Many members got replaced ever since the initial formation of the band. They found each other on the internet and wanted to establish a Korean metal band due to their mutual love for black metal music. “Korea is such a barren land for metal music” quoted from an interview Dark Mirror ov Tragedy had with Korean Music Entertainment online magazine – KoME. They grew up listening to metal music and wanted to create metal music of their own.

The 2018 album, The Lord ov Shadow, won the Best Metal Album of The Year in the Korean Music Awards in 2019.

Black, all-consuming, powerful and intense – these are the adjectives used to describe Dark Mirror Ov Tragedy. Their music is a mixture of art-rock, heavy metal, and classic music. The name of their band actually symbolizes the fact that our future might not be as rainbow and sunshine as we would imagine… Pretty depressing, huh? But also perfect to listen to when you’re hating life and just want some music to match that feeling. Listening to their music is also almost cathartic in a way, their second album The Pregnant of Despair serves as a good evidence for that. The build-up from each track and the beautiful vocals, especially from track 3: “Mournful Death to Everyone” transcend you to another realm.

This Korean metal band is currently touring across Germany, the UK, Portugal, Spain and France. They have 11 concerts coming soon (2022). You can find out more details here! Get your tickets soon if you’re living in these areas!

Oldies but goodies, racing back to almost thirty years ago, this Korean metal band was formed in 1993. They are iconic because of their unorthodox music and their scary looks. If you are into Randy Blythe’s music, I’m pretty sure you would be into Diablo’s music as well. Currently composed of five members – Jang Hak (vocal), Kim Soo-han (guitar), Choi Chang-rok (guitar) ,Songmin (bass), and Choo Myung-gyo (drums) – the band is signed under a Japanese record label Howling Bull. This Korean metal band did not debut their first split album CD, Legal Defense, until 1997 with other musicians (Seed, Off, Slam).

In the 2013 Red Bull Live On The Road music competition, Diablo won.

It is not easy to maintain a band for twenty-eight years, but Diablo did it, and they did it gloriously.

“I did music because I liked it, so I came all the way.” Said member Choo Myung-gyo in an interview done by Jung, a blogger.

Similar to Dark Mirror ov Tragedy, the music style of Diablo cannot be narrowed down into one particular sub-genre of metal music. They are in fact a brew of nu metal and groove metal, which are heavy metal that cater more to the mainstream taste as it’s a mixture of metal and other genres like hip-hop and rock.

Most of their songs are in English, making them popular internationally. In 2000, they released their first solo album, Desirous Infection, in not only South Korea but also Japan and the US. In it, 5 tracks are in English. They even recorded one of their albums, Undefined, in Los Angeles (Cherokee Studios).

Even though the members change constantly, the band still remains active in the Korean metal scene and gained recognition throughout the years. Just in 2020, “Project Diablo” was announced. They planned to release six singles, three mini-albums, and one full-length album.

However, after releasing two singles, Unheard Answer and Nothing (To Die For) in 2020, they haven’t been up to much in 2021. However, they promised in an interview that they are working on a full-length album and might release it soon for lovers of Korean metal music!

A 4-member Korean metal band from Busan, Traitor is a Nu-Death metal band signed under Realize Records. The group consists of deadring (bass, production), SARU(guitar), irohana (vocal) and Joey Lee (drums and leader). Although the band was technically formed in 2013, they debuted their first EP in 2018, “4th Rated Waste”.

If you love extreme, brutal metal, Traitor is definitely the band for you. Their music is full of strength and it’s tension can cut glass (especially for the baseline). They have the kind of music that makes your heart flutter.

Their latest activity was releasing their first full-length album, Zero the Traitor, in December 2020. But they’ve still been making an impact in Korean metal music in 2021.

With music that makes you feel that rush and hyped-up, this Korean heavy metal band Vassline technically was formed in 1996, but it was not until 2000 they released their own mini album, Bloodthirsty. The five-piece – Shin Woo Suk (vocals), Tiger Jin (guitars), Chainsaw Cho (guitars, voices), Bluce666 (bass, voices), Choi Hyun Jin (drums) – is signed under GMC Records. Prior to their debut, they mostly did collaborations with other musicians. For example, in 1999 they did the first track in 3000 Punk — “Valcan 4”.

I know what you’re thinking, Vassline = Vaseline?? It’s not a coincidence. This Korean metal band actually wanted to make themselves “Vaseline”(like the skincare brand) but apparently the name is already taken. However, they seem to be unwilling to reveal why they wanted this name.

It all started when Shin Woo-seok and Lee Ki-ho, who were classmates from an art academy, got together to form a band in the Winter of 1996. And different members join in later years, the rest is history.

Their 2004 album, Blood of Immortality, won the award for Best Rock Album at the 2005 Korean Music Awards.

Raw and strong vocals, heavy and deep guitar, bass line and skillful drumming that makes you want to stomp your feet… this Korean metal band’s songs are perfect to listen to when you’re very angry, and just want to scream! Because essentially they are screaming for you haha.

Especially for their award-winning album, Blood of Immortality. The first track is soft and peaceful (“Letalis Silentium”) – but that’s just the calm before the storm.

It quickly accelerated with rapid and powerful percussion at the beginning of track two (“An Ode to My Friend”).

The guitar solo sprinkled in these tracks are unbelievable- it actually makes me want to jump on a table and violently bang my head – it’s awesome!

Their music is rooted in Korean metal/heavy metal, but it also has alternative, punk, jazz and progressive rock elements. They have also pursued different metal styles throughout the years. On the other hand, the story being told by their songs changed from abstract and metaphorical to more straightforward lyrics about direction of life.

Not exactly new, but they dropped a full-length album Memoirs Of The War in 2017 and the single “Within Dark Rain ” in 2019. Very excited to listen to their new work in the future of Korean metal music!

Which Korean Metal Bands are You Going to Check Out?

I know metal music, especially death/dark metal, is not exactly everyone’s thing. To my fellow metalheads, try diving into the Korean metal genre. And for my fellow k-pop fans, try listening to these bands’ music. I promise they will take you on a new, different musical journey. Even though they are all Korean metal bands, they have different styles. Korean metal music is often overlooked, but it’s such an underrated genre that I really recommend putting in your playlist. You won’t regret it! So, honestly? Check them all out! Who knows. Maybe they’ll make you fall in love with heavy Korean metal music! Let’s get your scream on!!!

If you want to know more about other Korean music, check out our Music Page!

Hellbound review (2021): A South Korean Series Set Against a Backdrop of ...