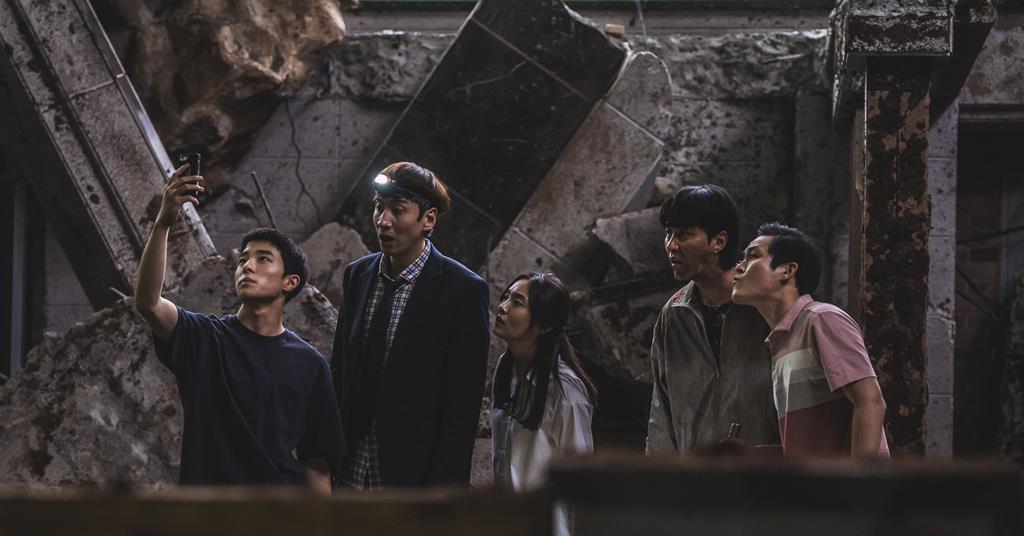 If you’ve kept an eye on the Korean movie scene any time lately, then you’d have heard about this film. Sinkhole has been one of the most watched and the most talked about films since its release August 11th. It even reached quite the milestone of viewership in the quickest time this year—but we’ll get back to that later. With the film’s unique plot and fantastic way of portraying it, it brought more and more people to see it. Here’s everything you need to know about Sinkhole and why it’s one of the biggest Korean films of 2021.

Many things can make a break a movie, but nothing is more impactful than the movie’s plot. Combining both comedy and disasters, the plot for Sinkhole is just what the world needs in a time like this. It brings laughter in the most bizarre situations, but keeps you gripping the edge of your seat as you wait for what’s next.

The way Sinkhole combines both the comedy and disaster genres is enough to have many people turning their heads to look at it. But, because the plot is just that fantastic, the movie has fared exceptionally well in the theater.

As a disaster-comedy, Sinkhole has roped in more and more people with the hilarious take on a disaster. The plot, quite unusual, only adds to the comedic factor. It’s director is Kim Ji-hoon and the film is just under two hours long.

In Sinkhole, Park Dong-won (Kim Sung-kyun) and his family move into a house that took eleven years for them to obtain. After all of their hard work finally pays off—allowing them to move into their house—they throw a housewarming party with their friends. Overnight, there’s a downpour that creates an enormous sinkhole. Of course, the sinkhole is only positioned around this house. Within minutes, the house and everyone in it is engulfed, falling hundreds of meters down.

As the movie goes on, Dong-won and the others in his house must fight to find a way out. And with another incoming rain storm that threatens to fill the sinkhole with water, they have to figure out how to survive on a time crunch. Can they do it?

Originally, Sinkhole was supposed to release around Chuseok 2020. But due to the COVID-19 pandemic, it was pushed back until August of 2021. But maybe it was always meant to wait. Who knows how well the movie would’ve done back in 2020.

With the building pressures of a pandemic and lack of social situations in the world, many people needed to have comedic moments shown through a disaster. And that’s exactly what Sinkhole brought. It made people laugh despite the serious situation the characters faced on screen and it seemed okay to do. Because of the unique plot, Sinkhole was able to become one of the most watched movies in Korea this year.

Besides the plot, the next thing that will make or break a movie are the actors/actresses involved. You can love the plot of a movie and absolutely despise the way a character is portrayed. Or a plot can be well constructed, but become overly cheesy if the actor/actress puts on a terrible performance.

Playing Park Dong-won in Sinkhole, Kim Sung-kyun is the perfect fit for his role. Making his acting debut first in theatre in 2009 and then later in screen in 2012, he’s got a lot of experience playing different roles. 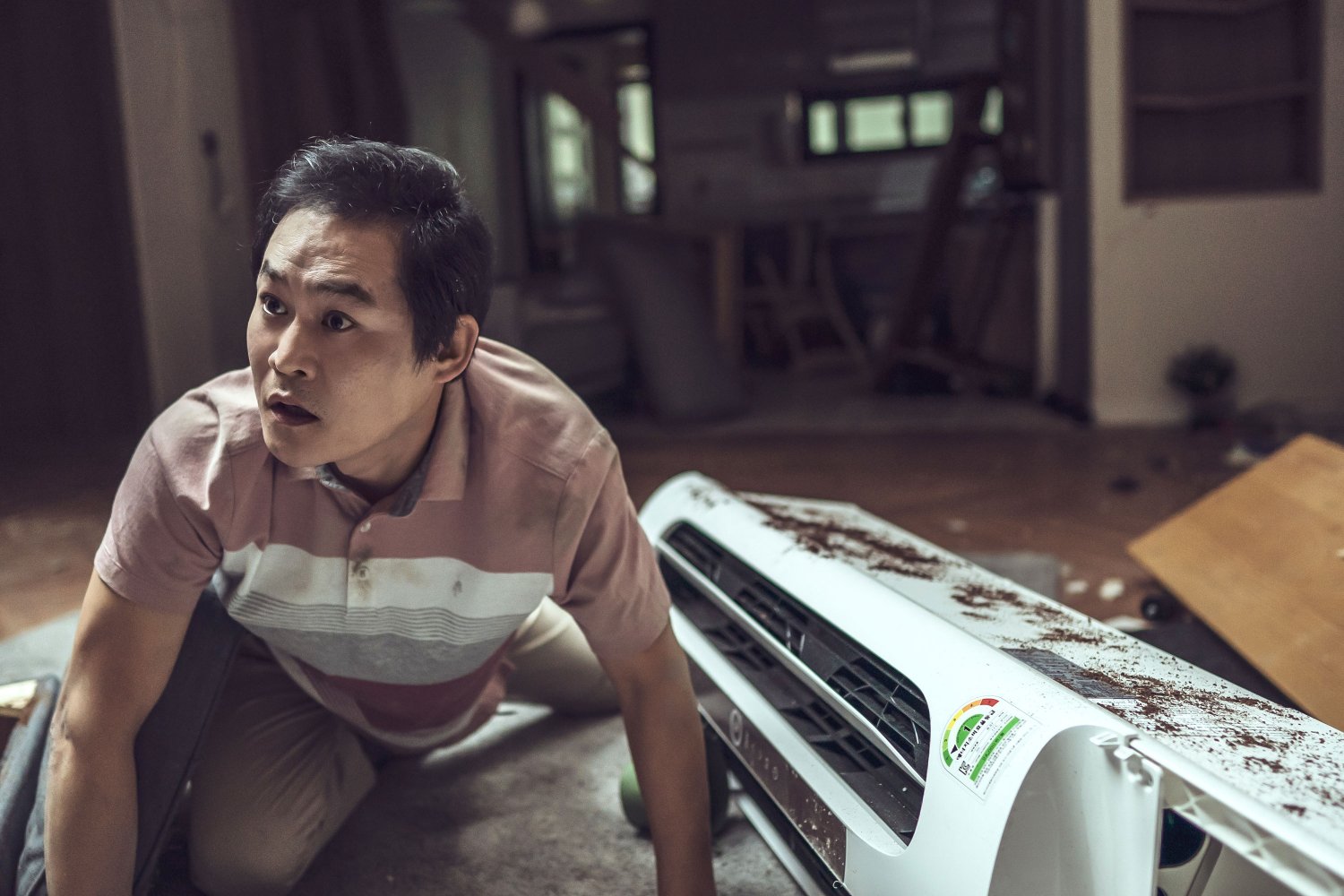 There’s a few upcoming things  he’ll be acting in that are in the works, but we haven’t gotten confirmation for them all yet. So keep an eye out for his future projects!

As the next lead character, Cha Seung-won plays Jeong Man-soo—Dong-won’s neighbor who also ends up in the sinkhole. As a single father, he struggles to raise his son alone. 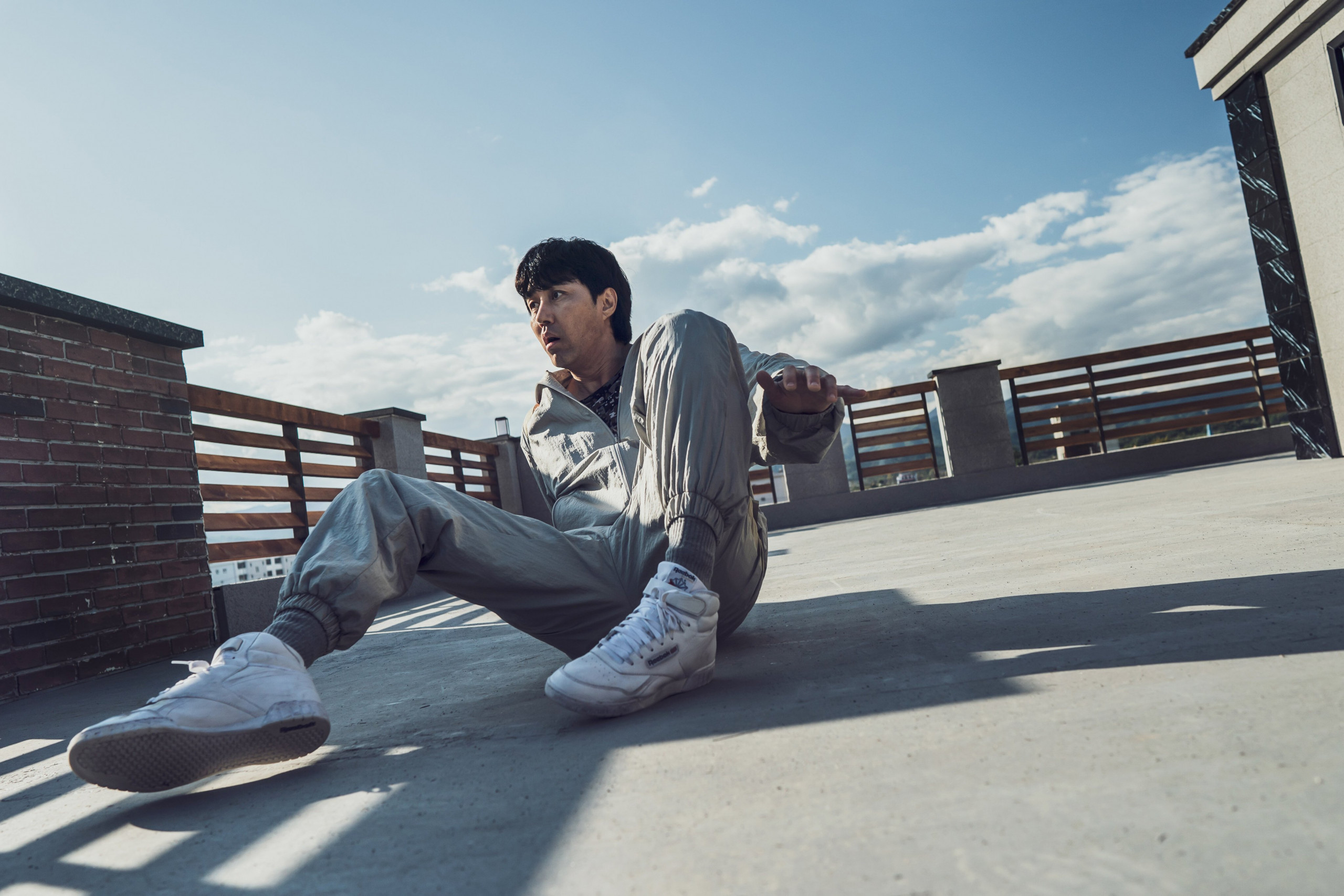 Though he began his career originally as a fashion model, he quickly reached stardom as he acted in the films Kick the Moon (2001), Jail Breakers (2002), and a couple others. Though these first films of his were comedies, he branched out into multiple other genres and even acted in a few notable television series. One includes A Korean Odyssey (2017).

In 2021, Cha also acted in the film Night in Paradise and the television series One Ordinary Day.

A Few other Actors/Actresses to Mention:

Among the rest of the cast for Sinkhole, there are a few others to mention. This includes Lee Kwan-soo (playing Kim Seung-hyeon), Kim Hye-jun (playing Eun-joo), and Nam Da-reum (playing Seung-tae). These actors and actresses played important parts throughout the film and fulfilled them very well.

Although jumping on a bandwagon and just going with the flow of others isn’t always the best thing to do, it will lead you to some amazing things. Sinkhole gained a pretty immense amount of support from viewers, more and more people going to see the film the more the numbers increased.

Because so many people loved the film, it reached more people. And it did ultimately hit a few milestones with its viewership, so I suppose jumping on this bandwagon wasn’t the worst. For this, the viewer response is definitely one of the main reasons Sinkhole became such a hit in Korea.

As I mentioned earlier, Sinkhole actually reached a milestone in 2021 faster than any other movie so far this year. Just six days after its release, Sinkhole hit the one million viewer mark. This is the quickest time it had taken a Korean movie to hit this milestone. And not too long after that, on August 31st, it surpassed two million viewers. It only took a total of twenty-one days for this film to reach this feat. 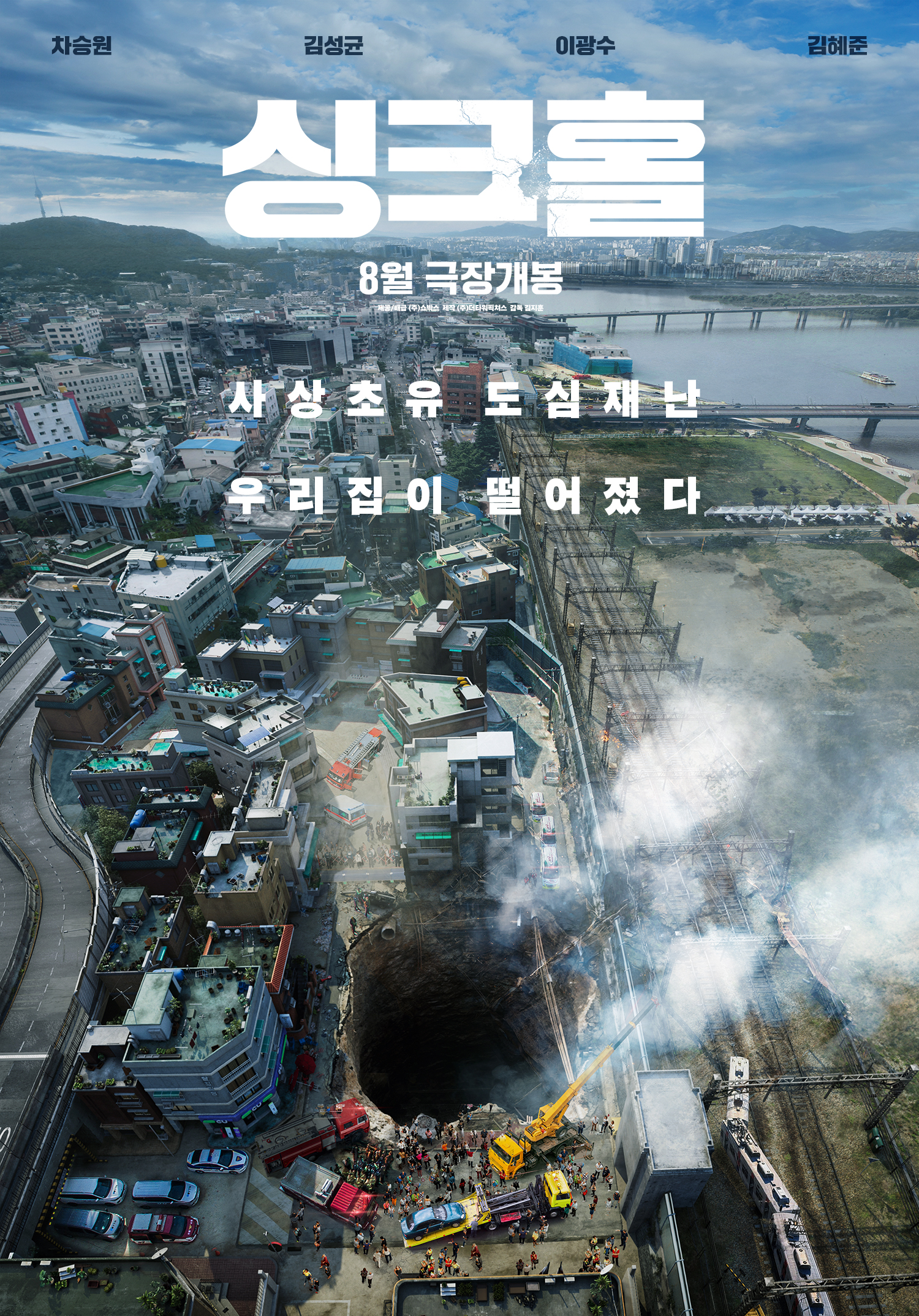 Also, Sinkhole recorded one of the highest opening performance of a Korean film this year with a total of 140,000 viewers on its first day of release. It’s obvious that this film was going to get bigger and bigger from the very beginning.

Why is this so impressive?

Well, during the middle of a pandemic it’s quite hard to bring in a lot of numbers with a movie. Especially films that take a lot of production costs, it’s harder for them to reach the break-even point. However, Sinkhole did this within a few weeks of release.

Why might this be? Honestly, who knows. It could’ve been the right timing, the comedic tone throughout the film, the acting, or it could’ve been something else completely. But one thing’s for sure, this movie is going to be one of the most talked about (and possibly even watched) Korean film of 2021. 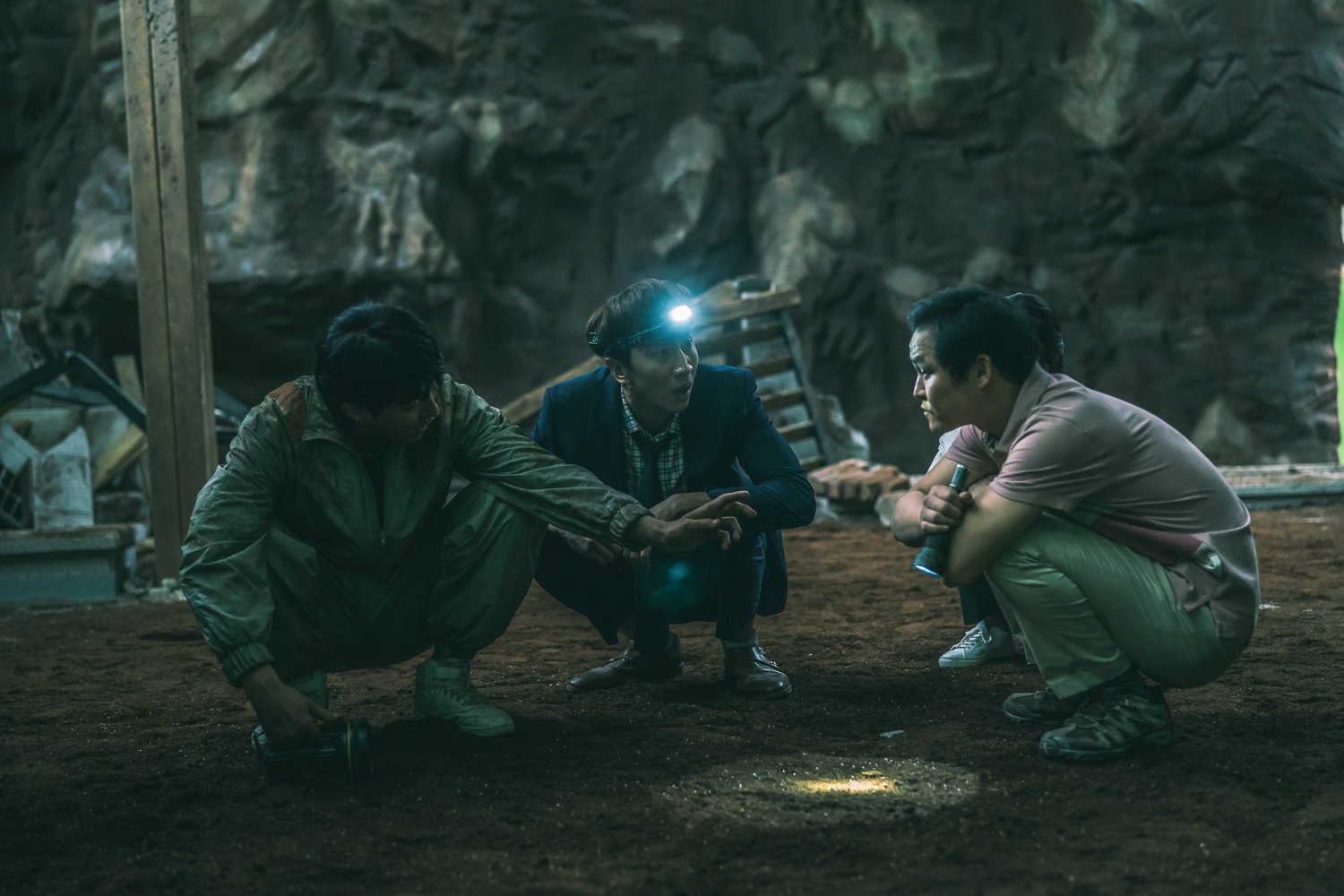