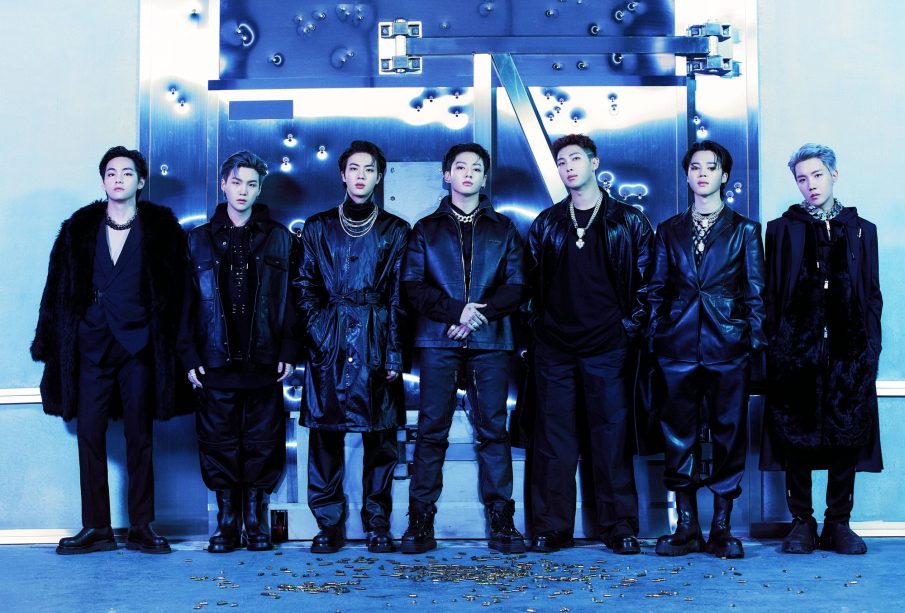 The wait is over, ARMY! Finally, after what felt like years, BTS is back with another comeback. Since “Butter” and “Permission to Dance” were released in 2021, fans have been eagerly waiting for a comeback from the group (especially one with a Korean song).

Here are all of the details you need to know about BTS’ PROOF comeback.

As BTS took to the stage on April 16, 2022 on their fourth night in Las Vegas—a city that accepted BTS and ARMY in massive ways (from turning the city entirely purple and renaming themselves Borahegas on Twitter)—fans were highly anticipating some kind of news.

Thanks to BTS’ habit of announcing things at the end of their livestreamed concerts, ARMY at the actual show and ARMY watching online had their hopes up. And they were right to assume something was coming.

After the members said goodbye to the fans in person and online, the lights dimmed in the stadium. Unlike what typically happens when the show is over, the livestream of the concert hadn’t ended. It couldn’t have been sixty seconds before the screen flashed again. Suddenly, flashes and moments from BTS’ past music videos flickered across the screen.

Once it reached the most recent video, it cut to all black. The words “WE ARE BULLETPROOF” faded onto the screen and flickered into a new logo. Finally, at the very end of the video, a date appeared. 2022.06.10.

BTS would be back.

PROOF is a massive album (literally and figuratively). Not only will this album encompass all the growth BTS has had, but it also contains 48 total songs across three CDs. 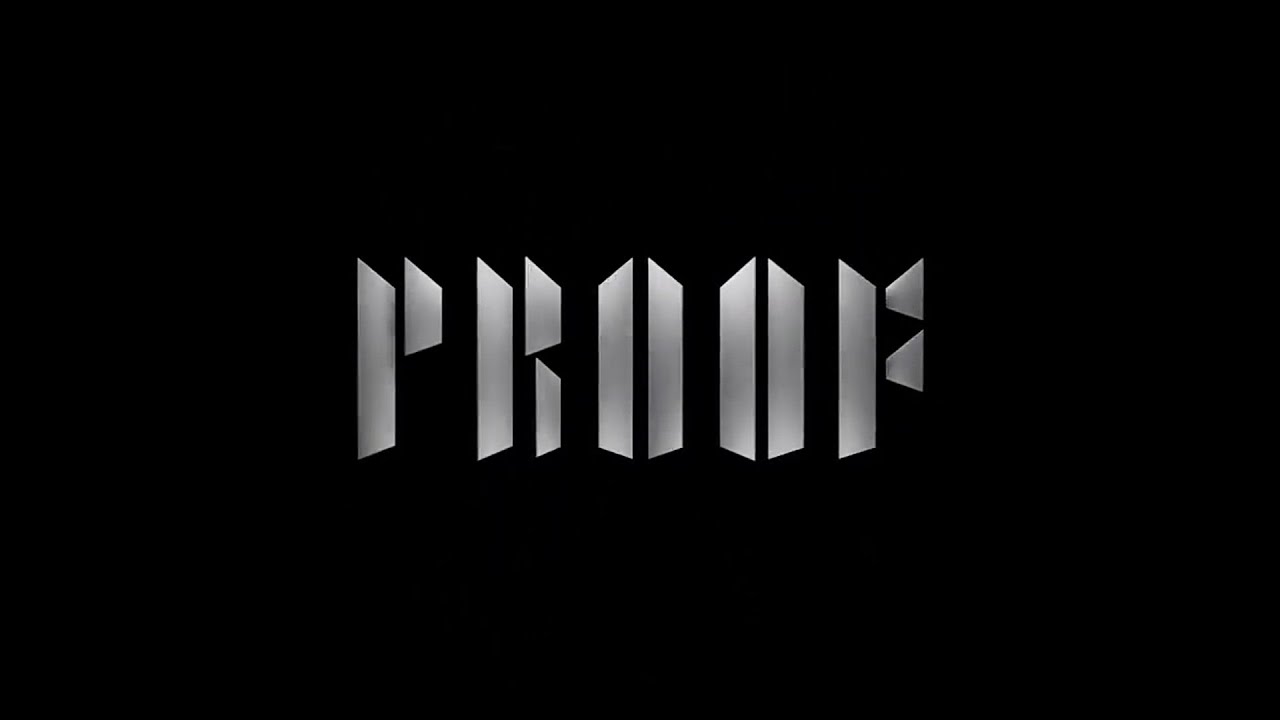 As an anthology album, PROOF is set to explore songs that mean something both to the fans and to the group themselves. With some older loved title tracks, some emotionally impactful songs, and some behind the scenes looks at our favorite melodies, this album will both be a journey through BTS’ growth and an emotional rollercoaster.

The album has two overall versions. A standard edition and a compact edition.

The Standard Edition includes an outer box, an outer sleeve, The Art of Proof, a photobook, a book called Epilogue, a lyric packet, three CDs, a poster, multiple photocards, and a postcard.

The Compact Edition includes a lot of the same stuff, but in a smaller version. It has an outer sleeve, a photobook, three CDs, a photocard, a postcard, a mini poster, and a discography guide 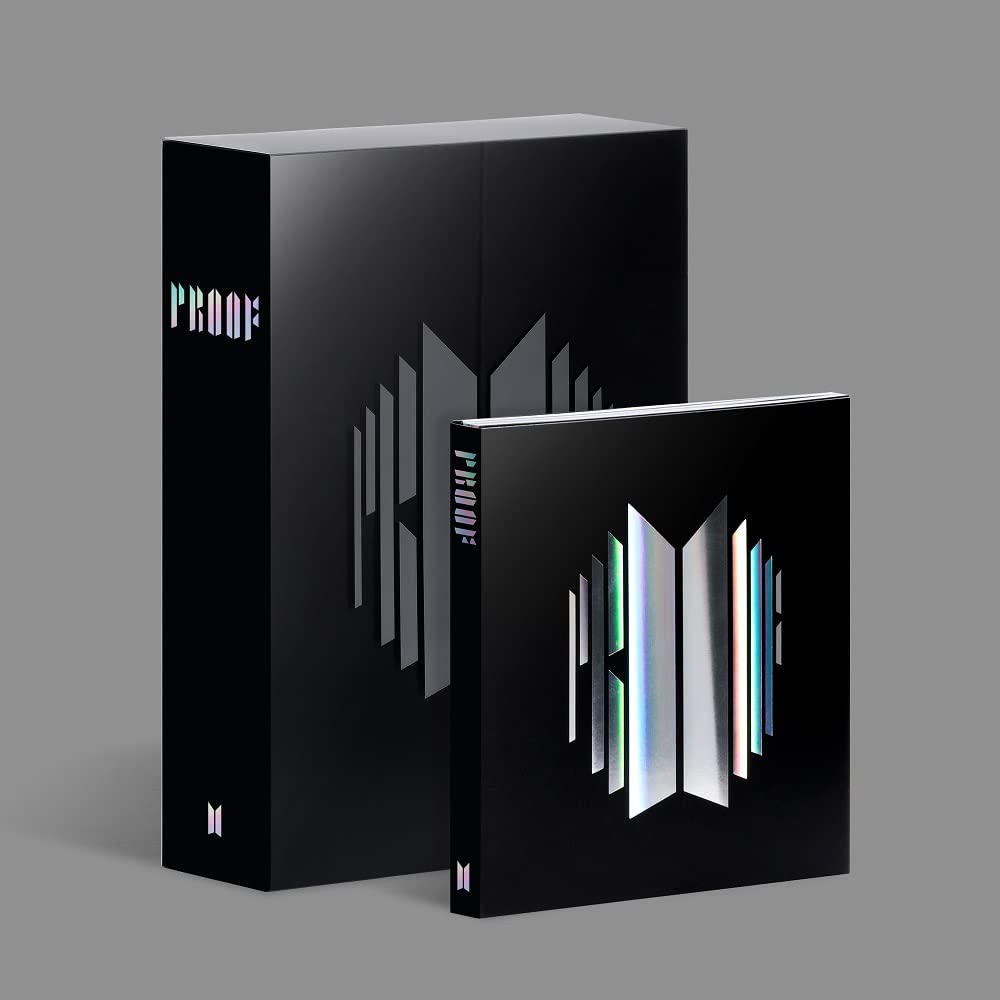 Each CD of PROOF has its own unique tracklist with at least one new one per CD.

With nineteen total tracks, the first CD has favorites such as “Born Singer,” “I Need U,” “Blood Sweat & Tears,” and “Butter.” The title track for PROOF is also on this CD—“Yet to Come (The Most Beautiful Moment).” BTS released this tracklist on Twitter May 8th. 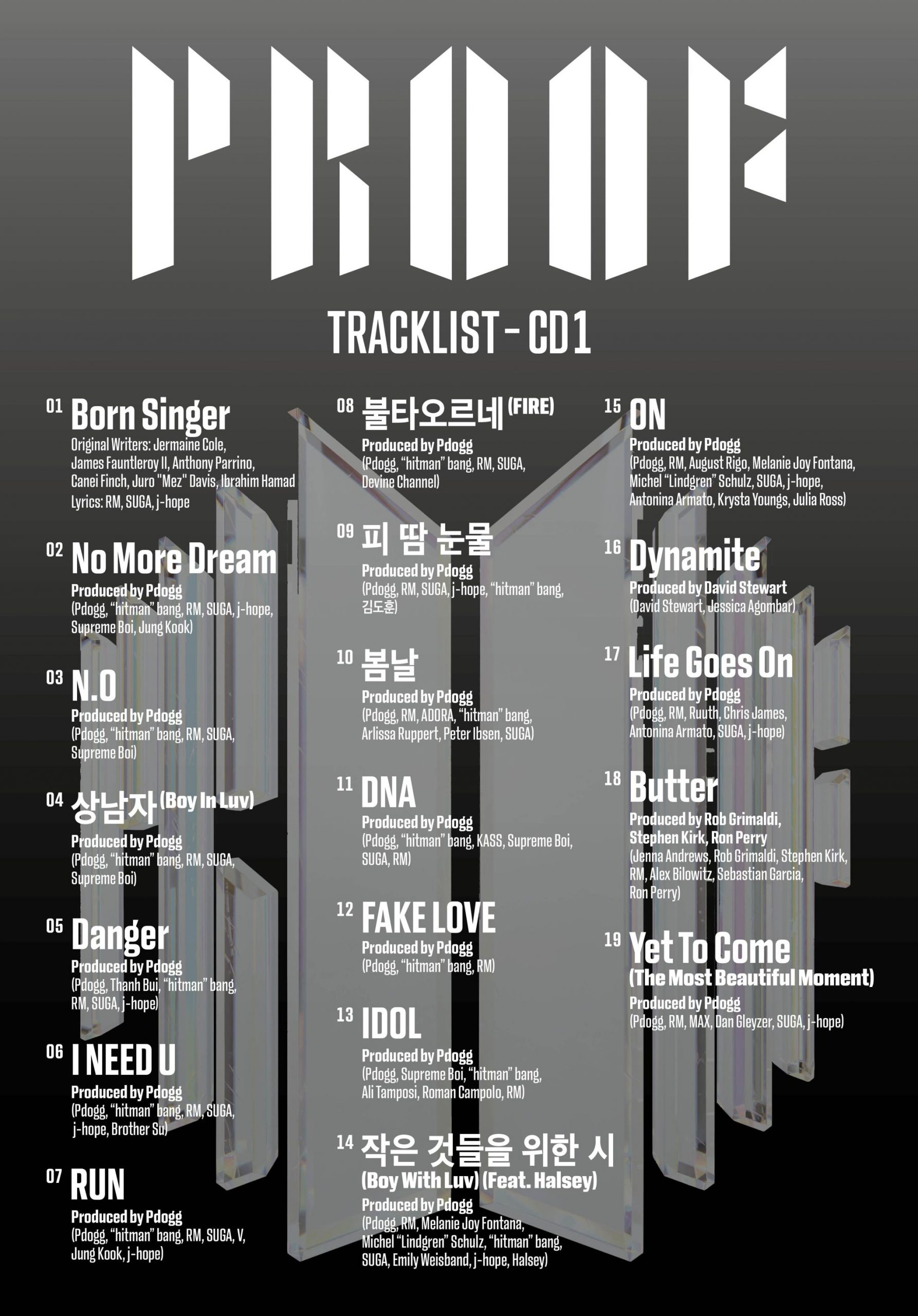 The day after, BTS released the tracklist for CD 2. This CD dives more into their solo work and unit tracks, including songs such as “Intro: Persona,” “Jamais Vu,” “Filter,” and “00:00 (Zero O’Clock).” On this CD the new song is “달려라 방탄 (Run BTS).” 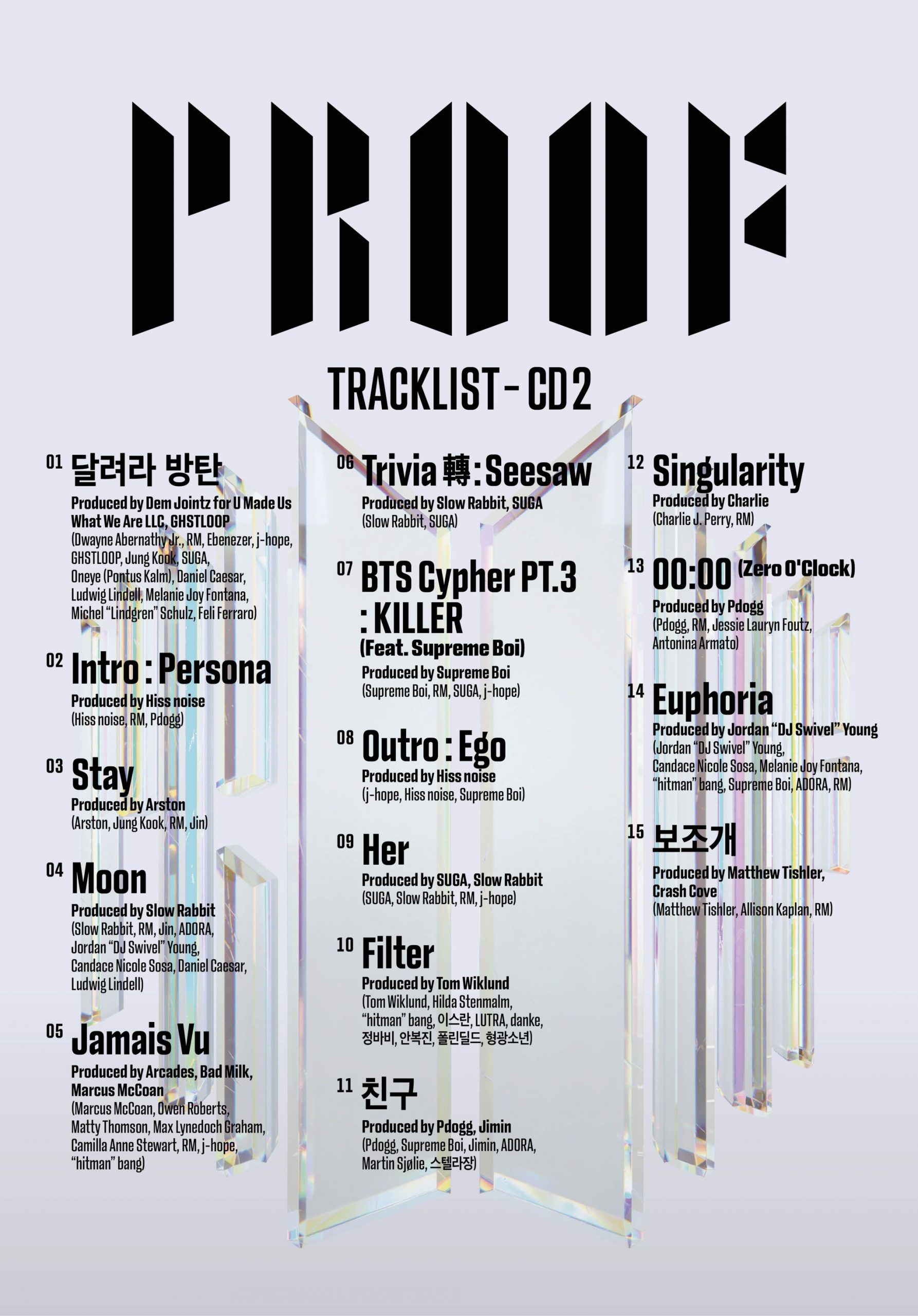 And finally, on May 10th, BTS released the third and final tracklist. Unlike the other tracklists, this one is a bit different. Full of demo versions, this CD will play the behind-the-scenes moments for our favorite songs—including “Jump,” “Boy In Luv,” “Boys with Fun,” and “Spring Day.” There are also quite a few tracks that we haven’t seen included on this album. “For Youth” is the only song from this CD that will be available digitally, but the CD also has the unknown songs “애매한 사이” and “따옴표.” 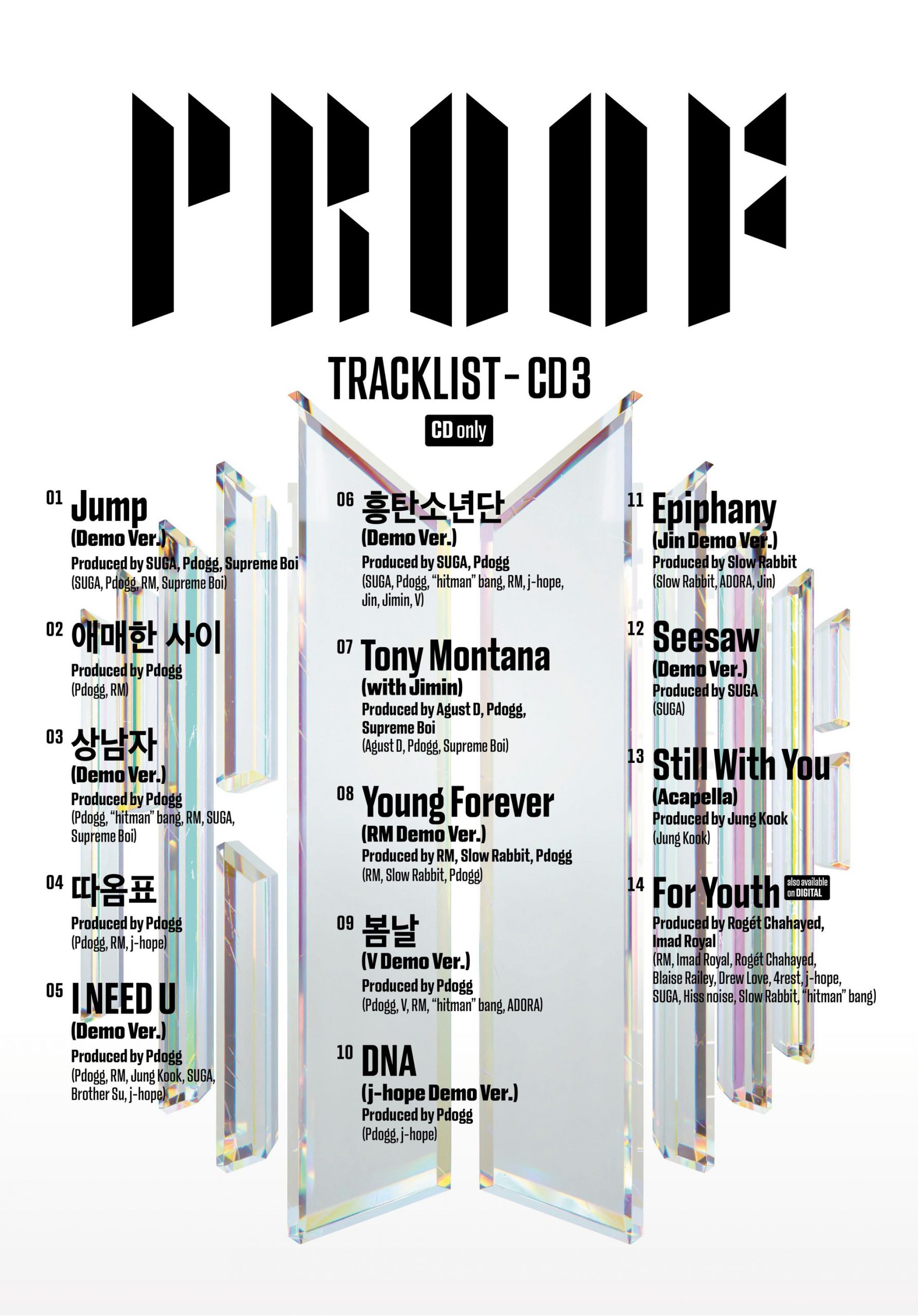 Proof of Inspiration and Concept Photos

Starting on midnight of May 17th, the group started releasing short clips known as “Proof of Inspiration.” These videos, not quite sixty seconds long, had each member detailing which two songs they chose for the album and why they chose them.

Unfortunately, the videos aren’t up on YouTube. But you can find each individual member’s video on Twitter here (RM, Jin, SUGA, j-hope, V, Jimin, Jungkook).

The first concept photo for PROOF came out on May 27th. This version (Proof version) showed the group standing in front of metal that’s littered with bullet holes. In the group shot, there are bullets scattered on the floor to truly showcase BTS’ bulletproof-ness. 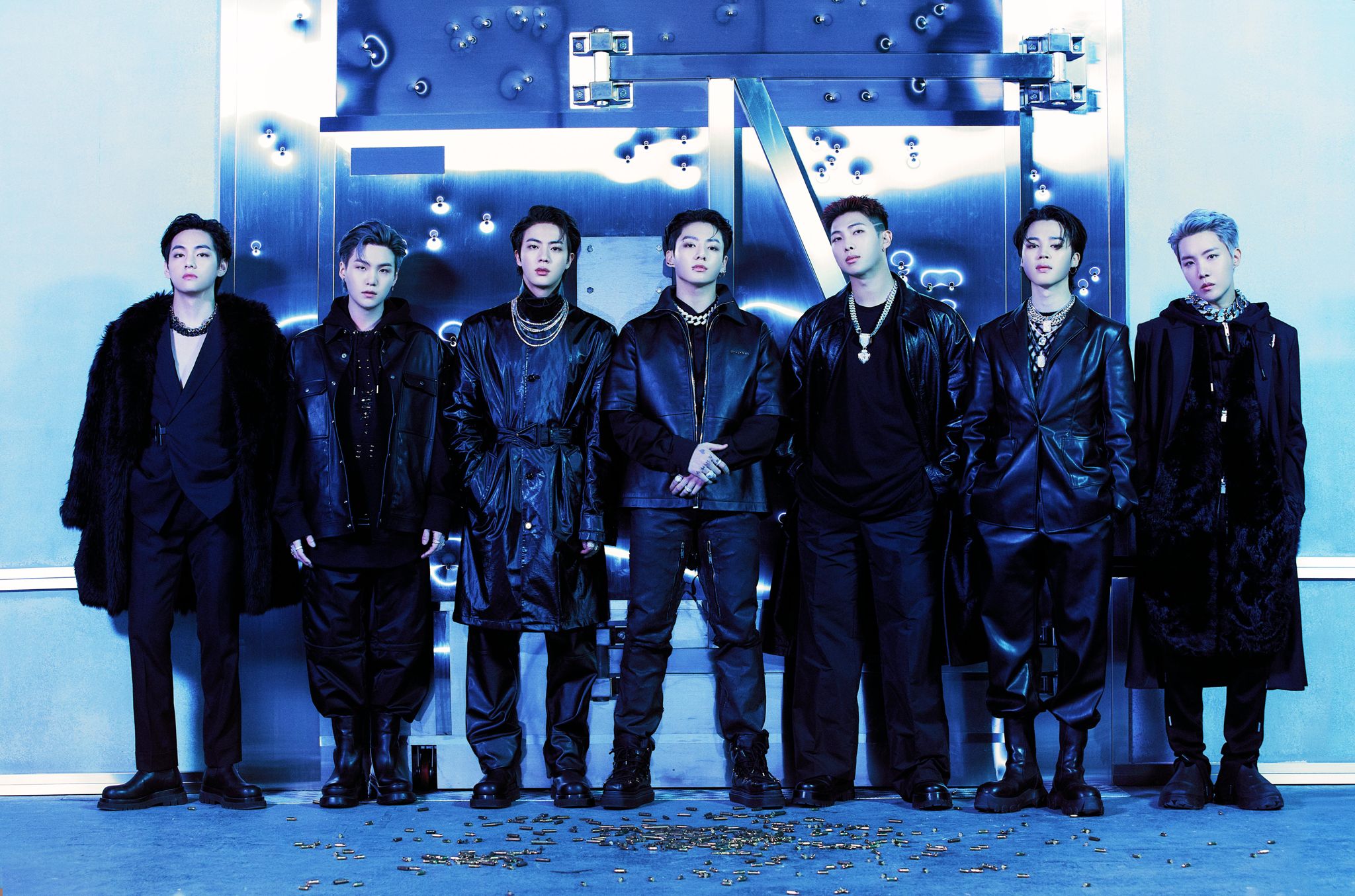 A few days later, they released the next concept photo version—the Door version. Completely contrasting in colors, the Door version has the members standing in front of a bright white backdrop and wearing soft pastel-colored suits. (There are also individual member images in this version where the members are standing in a dark room.) 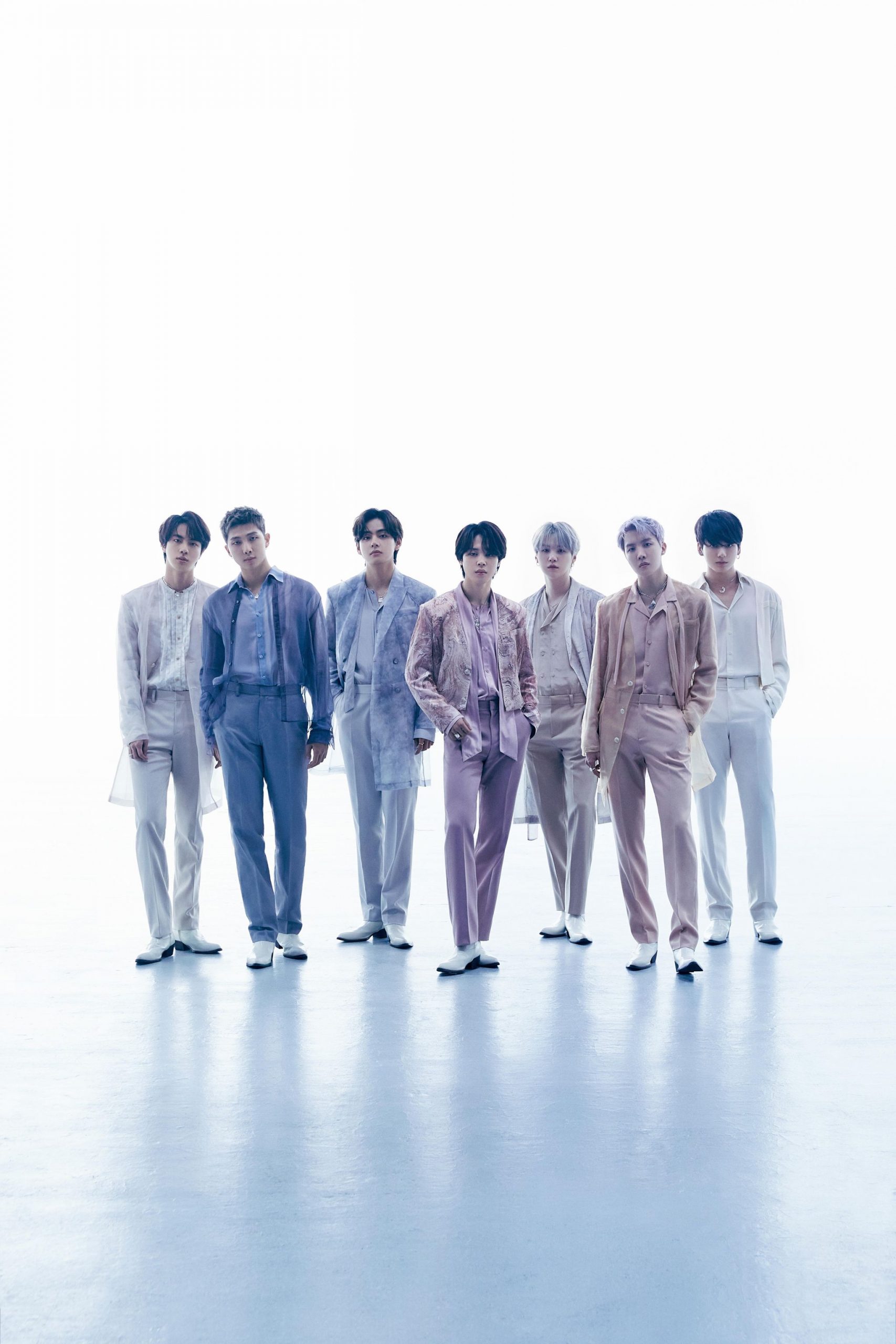 Of course, the trailer for the music video came out just a few days before the actual music video itself. On June 7th, the teaser for “Yet to Come (The Most Beautiful Moment)” came out. In just thirty seconds, the video shows the members standing by themselves in a desert-like area and a few references to their past eras.

They also put out a short compilation video of their title tracks over the years leading up to the release of “Yet to Come” and the album.

What is the main idea/concept for PROOF?

Above everything else, this album is meant to take us on a journey with BTS.  It’s meant to show us snippets of their career through their music, with songs that not only hit hard with their beats but also with their significant messages.

BTS has grown quite a lot in their nine years of being a group, what better way to honor that than an anthology album?

“Yet to Come (The Most Beautiful Moment)”

If the anthology itself hasn’t been enough to put you in your emotional feels, then “Yet to Come” surely will.

With soothing music, “Yet to Come” is a song full of shout outs to the past. The lyrics talk to things relating to the group’s career and convey that the best, of course, is still coming for them. Besides the song itself having impactful lyrics, the music video also brings you down memory lane.

Throughout “Yet to Come,” you can spot various scenes from other music videos (like scenes from “Spring Day,” “Blood Sweat & Tears,” and more). The music video is truly like visiting past moments in BTS’ career…

Where to get PROOF?

If you haven’t gotten your copy yet of PROOF, then you might want to start looking! For those of you who have the Weverse Shop app, you can find both versions of the album there. In the USA, you can find the album versions on popular sites like Amazon, Walmart, Target, and FYE. In other countries, you might need to take a look at your large retail stores or K-pop-related online shops that ship to your country.

If you’d like to get a closer look at this album, then check out our K-Pop Category. We will be doing a deep dive into each CD from the PROOF album—so keep an eye out! Also, feel free to check out the other blogs we wrote for BTS Week! From information about their growth over these years to their company’s growth, we’ve talked about many things BTS-related. You can also check out the blogs we wrote for BTS’ 8th anniversary last year.

From Rags to Riches: BTS’ Growth in 9 Years

An In-Depth Look at BTS’ PROOF CD 1, from an Emotional Beginning ...