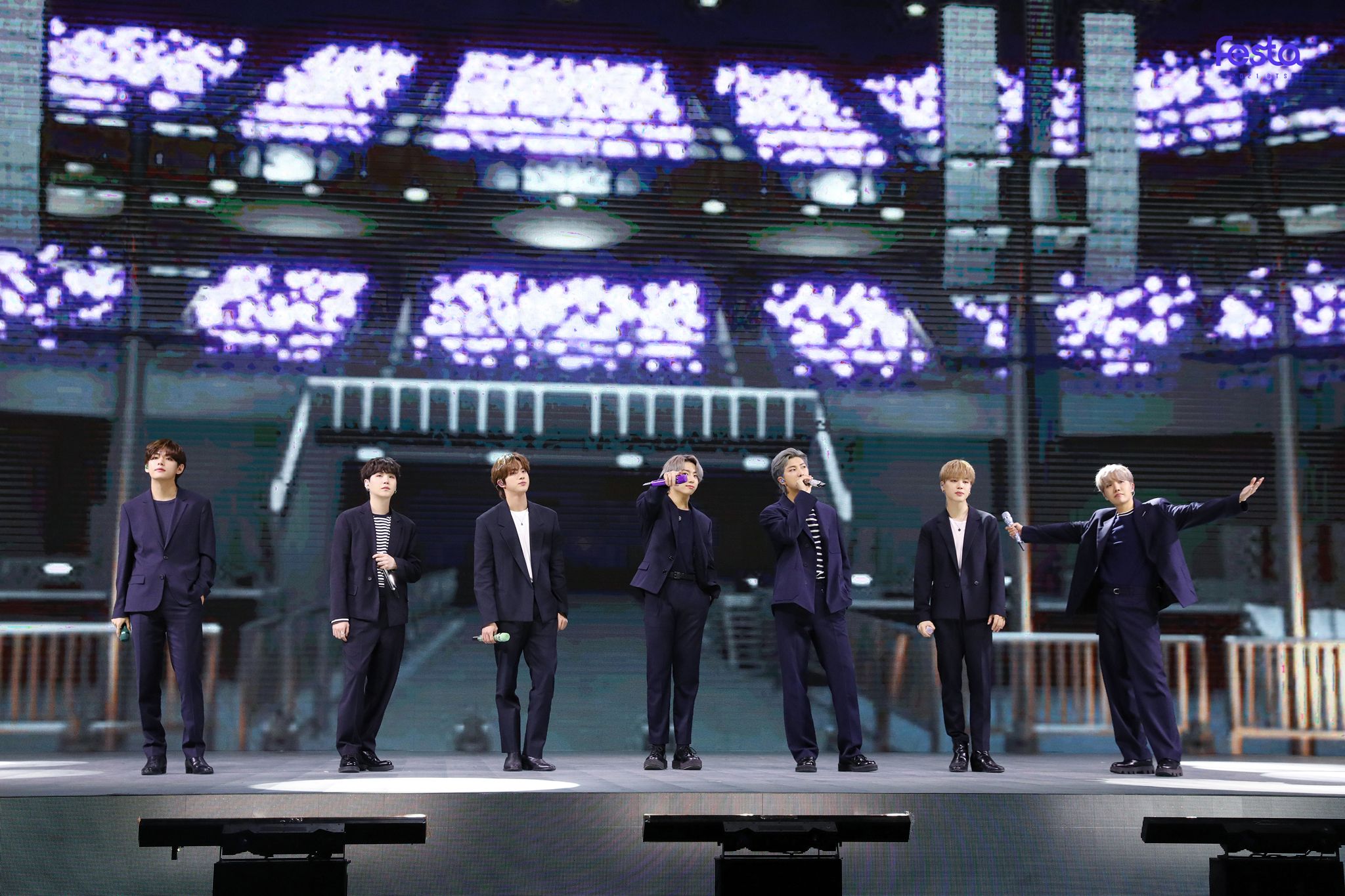 With the world shutting down in-person concerts, because of Covid-19, many artists got a little creative with their performances. Since award shows and other music shows continued—albeit, virtually—most performances were filmed at home. And rather than doing what many other artists had (i.e. filming in their living room or single studio room), BTS took it a step further. They used this chance to film special performances in unique places around South Korea. By having different filming locations, BTS broke the mold on what to expect from at-home recordings. Let’s take a look at the top eight places BTS performed! 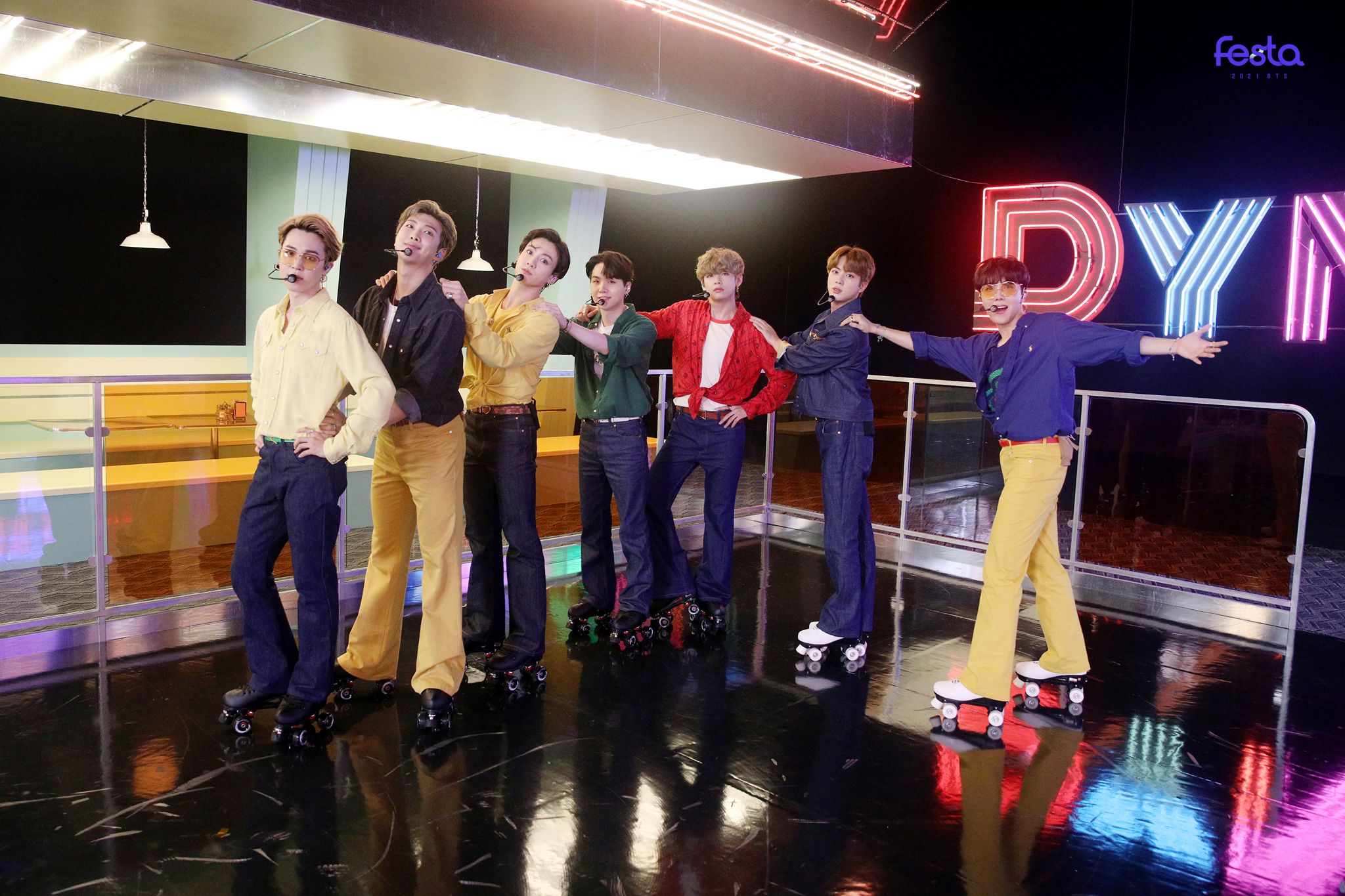 The Jamsil Olympic Stadium, also known as the Seoul Olympic Stadium, is a multi-purpose stadium in Seoul, South Korea that was built for the 1988 Summer Olympics and the 1986 Asian Games. Today, the stadium itself does not have an individual occupancy, but it is used for a lot of different events—including sports events and concert events. 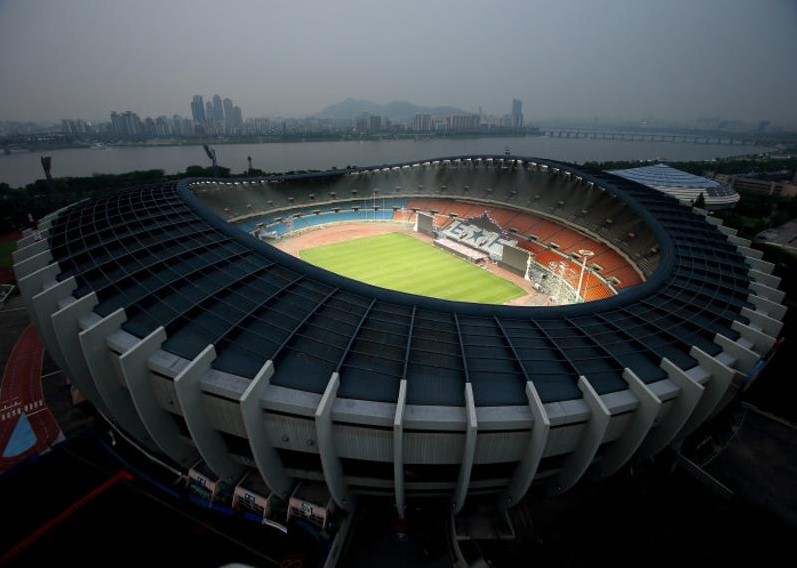 Originally, it was built to seat around 100,000 people. However, today it seats closer to 70,000 people. Even so, the Jamsil Olympic Stadium is the largest stadium in South Korea, making it one of the most sought-after places in South Korea to perform in.

BTS first performed at this location in 2018 for their Love Yourself World Tour. 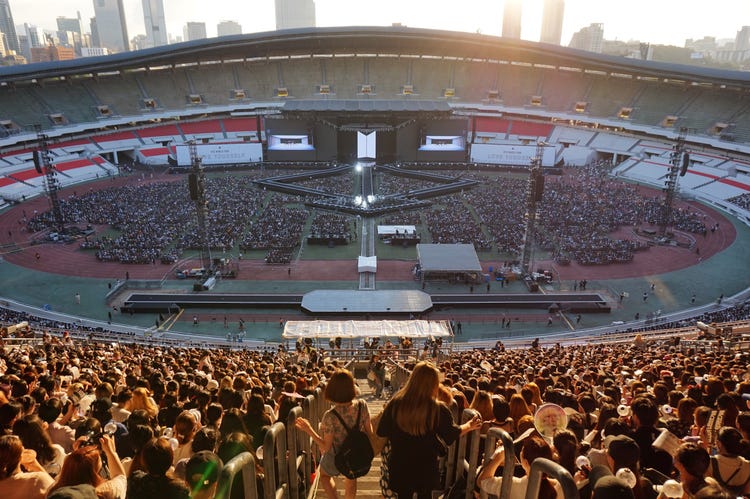 But, for the 2020 American Music Awards (AMAs), BTS rented out the stadium to give an unforgettable performance. They performed two songs. “Life Goes On:”

Built for the 2002 FIFA World Cup, Sangam Stadium—also known as the Seoul World Cup Stadium—is the second-largest stadium in South Korea. Similarly to the first stadium, it seats just shy of 67,000 people. 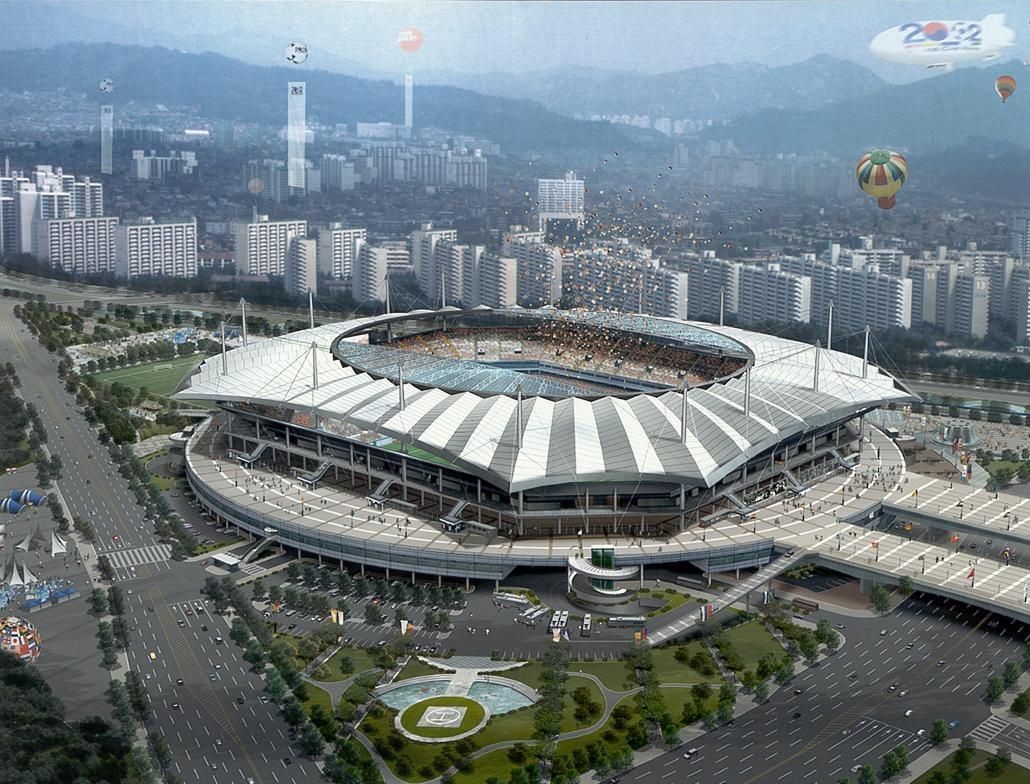 It’s home to the Korea Republic national football (soccer) team and their club team FC Seoul. So this stadium is mostly dedicated to football games. However, many large concerts have been held here. Including the yearly Dream Concert event every May/June.

BTS never performed at this stadium until their pre-recorded performance for the 2020 Mnet Asian Music Awards (MAMAs).

For their MAMAs performance, they pre-recorded their song “ON” in the stadium. However, they also had performances for “Life Goes On” and “Dynamite.” These performances did not take place at Sangam Stadium.

Out of the places BTS performed on this list, Sangam Stadium is one of the biggest. This performance was rather enormous in comparison to others—complete with their own marching band and individual dance breaks.

The Incheon International airport opened its doors in 2001. It is currently the largest airport in all of South Korea. Overall, it is the primary airport for the Seoul area. 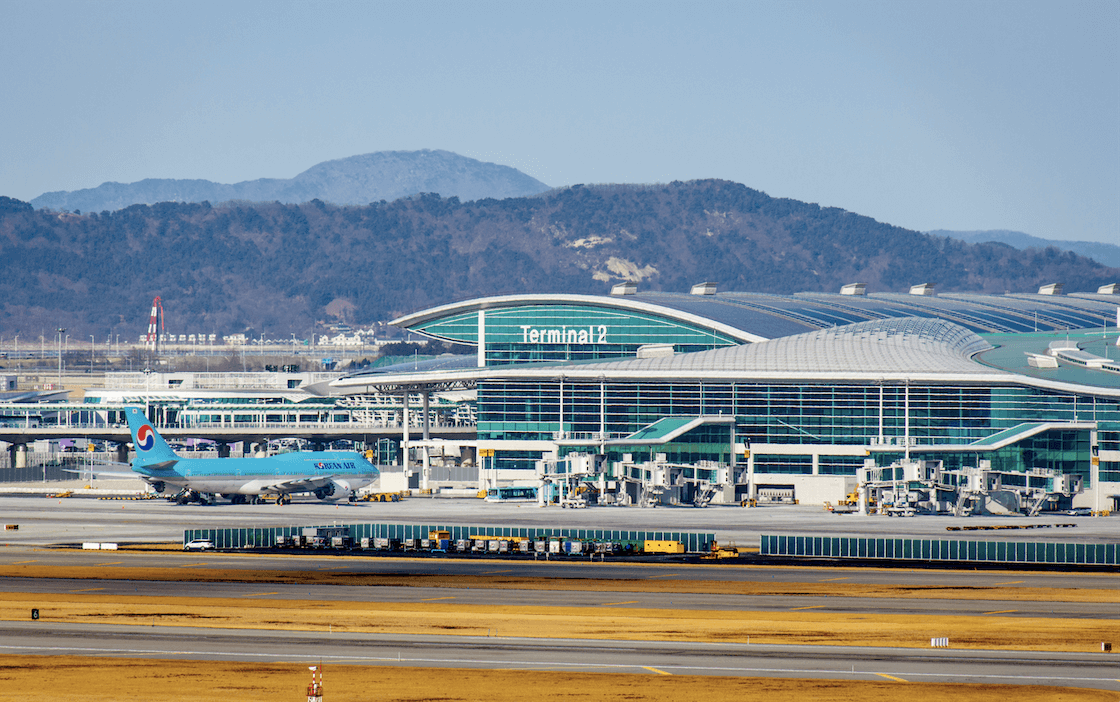 It’s located on an artificially created piece of land between two islands—Yeongjong and Yongyu. Because of the shallow water between the islands, they were able to dump more dirt (land) there and create the artificial piece of land. Pretty interesting if you ask me!

For their performance at the 2020 Billboard Music Awards (BBMAs), BTS rented out Terminal 2 at the airport.

Though you can’t see it in the video above, BTS included a special animated airplane in this performance. It looked really cool in the final result! It was an amazing performance the group put on. And since it was such a surprising location, it became one of the most iconic places BTS performed.

Not only did BTS perform at an airport, but they took it a step further by performing in an airplane. As sort of a homage to the Korean airline, Korean Air, BTS performed in a Boeing 787-9 Dreamliner.

For this performance, on the Late Late Show with James Corden, BTS performed “Life Goes On” and “Dynamite.” We only see the airplane during the second song, but it’s definitely left a lasting impression. It’s one of the most unique places BTS has performed.

The National Museum of Korea

If we want to talk about one of the more iconic places BTS has performed in, then we need to talk about the National Museum of Korea. This museum, built around 1945 and relocated to the Yongsan District in 2005, is the place you want to go to see all things Korean history and art. It is the most visited museum in South Korea.

When Covid-19 hit, the graduating class of 2020 lost a lot of their celebrations for the occasion. Because of this, Barack and Michelle Obama helped put together an online event streamed live on YouTube. This event, Dear Class of 2020, had a lot of different performers and content creators speaking for those graduating. Further, BTS was one of the performers.

They performed three songs in total. “Boy With Luv,” “Spring Day,” and “Mikrokosmos.”

They also gave a nice speech for those graduating. One of the popular lines that still floats around the fandom came from this speech. During his part, Jimin says, “Remember there is a person here in Korea, in the city of Seoul, who understands you.” This one line has brought unimaginable comfort to ARMY throughout our toughest times. You can watch this speech here:

Firstly, Everland is the largest theme park in South Korea. Annually, Everland gets millions of visitors. Basically, it’s a hotspot for tourists and Koreans alike. 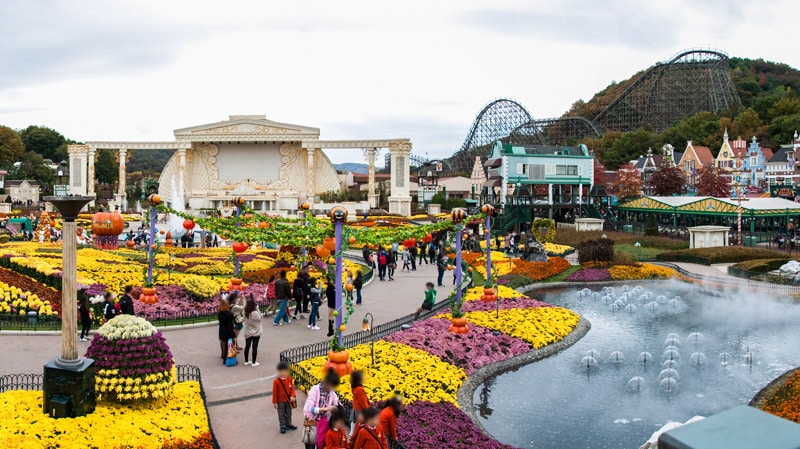 It first opened in 1976 and has steadily built up since then. Though Everland is such a widely popular attraction, it’s not because of thrilling roller coasters. It’s because of the environment with it. People go to Everland to have fun and enter some kind of “magical” land. Above all, Everland is a fun place to step into.

For their performance on America’s Got Talent 2020, BTS recorded their song “Dynamite” here. The group dressed in their classic “Dynamite” outfits and danced their way around the theme park. It was a lot of fun to see the boys perform in such a location. You can watch this performance here:

Built in 1395, the Gyeongbokgung Palace is the main royal palace from the Joseon dynasty. Throughout the years, the palace had been destroyed, rebuilt, and home to various Kings. Now the palace is a cultural spot that many can go to visit. In addition, it’s a beautiful location for filming music performances. 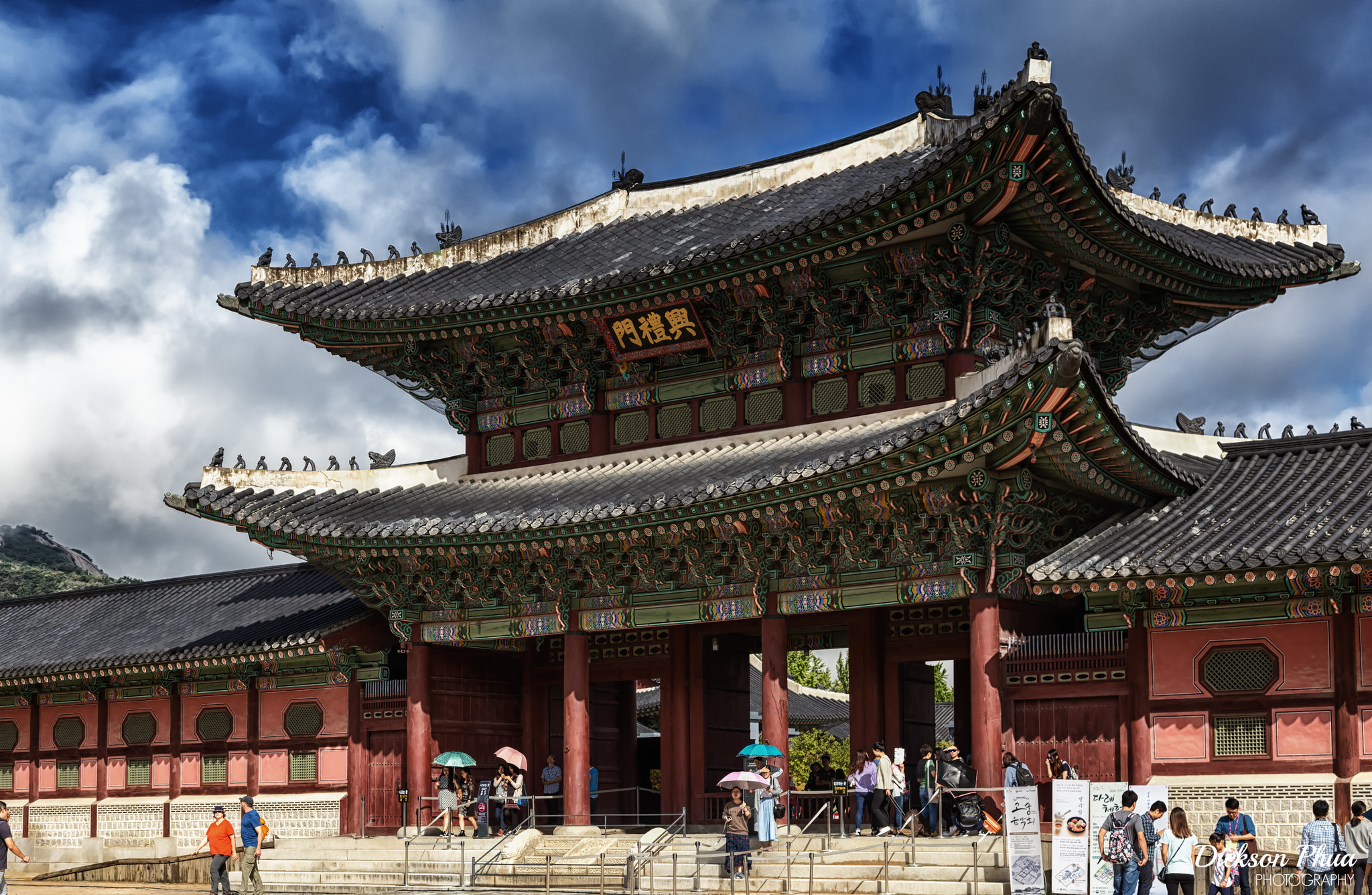 Wearing their modern-day hanboks, BTS performed their song “Idol” at the Gyeongbokgung Palace. During their week-long takeover on the Tonight Show Starring Jimmy Fallon, BTS performed a plethora of songs each night. But their performance for “Idol” takes the prize for best cultural location. Their performance is gorgeous to watch and the scenery of this place is really beautiful.

Now, you might be wondering why we’ve included a business building in the list of “beautiful Seoul locations.” I don’t have much of an answer to give you besides how beautiful the city view of Seoul is.

The Parc1 Tower is the second tallest building in Seoul, standing with just under seventy floors. It’s the location of various businesses and purposes. 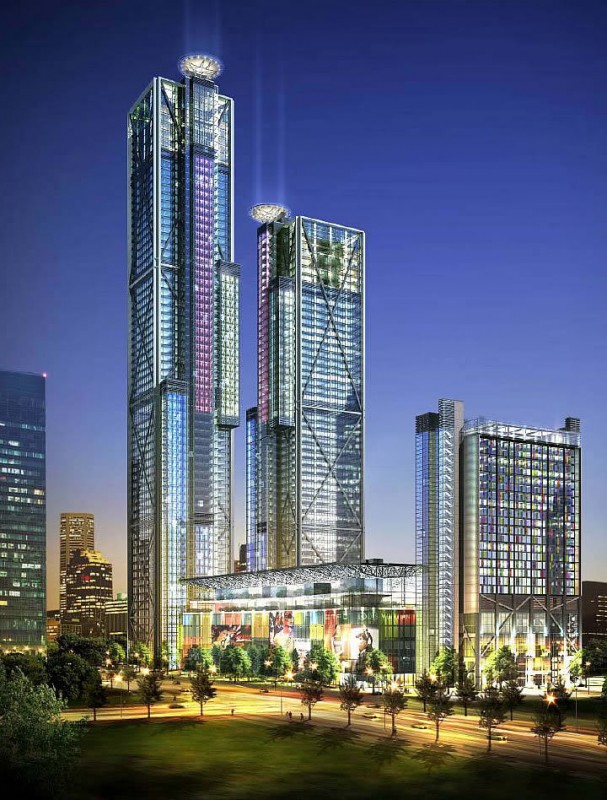 BTS surprised everyone when they took to the sky for their 2021 Grammys performance. Almost literally, too. For this performance, BTS started inside. However, as “Dynamite” reaches its bridge, the members are taking to the stairs and heading outside. The performance ends with them on the roof. You can watch this performance here:

Certainly, out of all of these places BTS has performed, their performance at the top of the Parc1 Tower has the prettiest scenery you will ever see.

Lastly, we have their performance at Grand Central Station. Before Covid-19 fully had the world in its grasp, BTS was still in the USA for their Map of the Soul: 7 promotions. They guest-starred on the Tonight Show Starring Jimmy Fallon for a special all-BTS episode. They traveled around New York City, played games in a subway car, and had a great time. Lastly, at the end of the episode, BTS made history as they perform their title track “ON” at Grand Central Terminal in New York City.

Overall, this performance was unique and unexpected. One of the best kinds we could get. After the show, BTS released a BTS Episode with the behind-the-scenes, showing us how hard they worked on the performance. They even talked about the fact that they only had a short window to record the performance, at nearly four-in-the-morning as Grand Central Station couldn’t be closed off for too long.

You can watch this video here:

What are some of your favorite places BTS performed?

Out of the eight places—nine if you include our honorable mention!—which place was your favorite? Did you know about all of these amazing places BTS performed?

If you’re enjoying our daily blogs about BTS for our BTS Week here at KWorld Now, then make sure you’re coming back every day to our Blog Page. We still have a few days to go, so you don’t want to miss them! And if you’re curious about the content we still have coming up, check out this schedule we made last week! It tells you about our plans for each day and even links you to those posts once they’re published. Check it out if you’d like to read more about BTS.

And I hope you’re enjoying Festa with BTS, ARMY. It’s getting closer and closer to their anniversary, so get ready to celebrate! Happy Festa ARMY!

The Top 5 Iconic BTS Styles throughout the Years

BTS Cooking and Their 6 Interesting Roles in the Kitchen