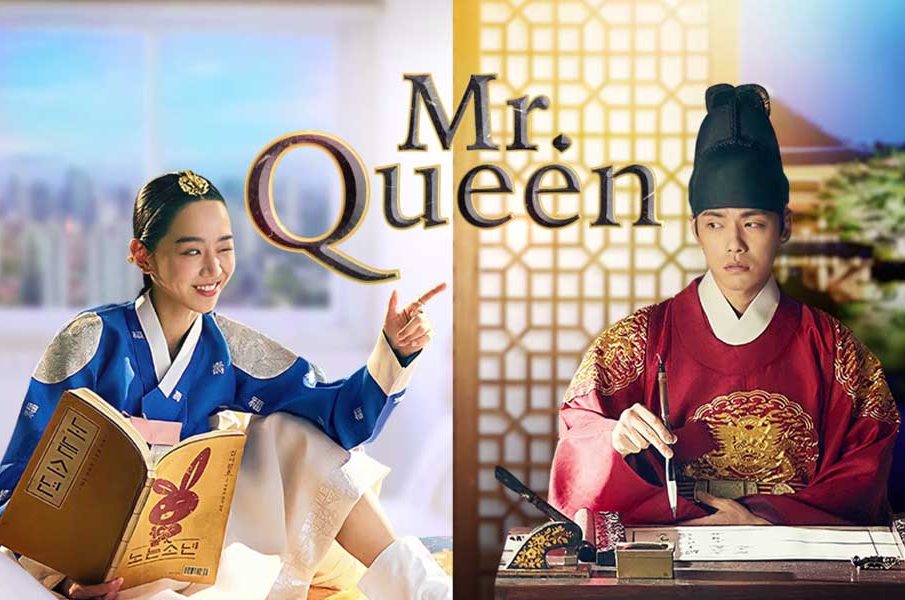 Mr. Queen is a K-drama that aired from December 12, 2020 to February 14, 2021 on tvN (Total Variety Network) every Saturday and Sunday. This drama is also available on Rakuten Viki with 20 episodes and with extra 2 episodes. It was directed by Yoon Sung-sik, it stars Shin Hye-sun as the Queen and Kim Jung-Hyun as the King of the Joseon era. This series takes you back to the Joseon period, it’s a funny historical drama that has to be in your watchlist and will surely not make you bore. So now we will give you 4 reasons to watch Mr. Queen K-drama:

The story begins with a modern age chef Jang Bong-Hwan (Choi Jin Hyuk) who works in the Blue House (South Korean Presidential residence). He meets with an accident and his soul time travels in the past in a historical period during Joseon era and then gets trapped in the body of Queen Cheorin (Shin Hye-sun). But how he manages in the palace and lives according to the traditions but with bad royal etiquettes during that time is so fun to watch.

Though Choi Jin Hyuk had little screen presence but his character as the chef and how his soul time travels is the main highlight of the story, as through his character we get to know about the story and politics in Mr. Queen K-drama.

Shin Hye-sun as Queen Cheorin is literally amazing to watch. She is the main hero of this drama. Her funny behavior and antics will make you laugh a lot. How her behavior changes when Bong-Hwan soul comes inside her and how she performs and behaves the way he does is surely remarkable.

Kim Jung-Hwan as King Cheoljong is pleasant to watch. His characterization from beginning to the end is one of the main highlights. This is the first time where the actor has played a historical character. The way he has portrayed emotions and aggression on the screen will make you like him so much.

Along with them, the supporting actors performances cannot and should not be forgotten. They may be supporting, but their characters have huge impact. Bae Jong-ok as Grand Queen Dowager and Kim Tae-woo as Kim Jwa-Geun, Grand Queen Dowager’s younger brother will make you love and hate them at the same time. Same goes with Na In-woo as Kim Byeong-in, the adopted son of Kim Jwa-Geun and adopted cousin of the Queen Cheorin has many layered characters, you will love, hate and sympathize with him a lot.

This drama is historical, thrilling, mysterious and funny at the same time. In one scene you will be on the edge of your seat and in another you will be laughing uncontrollably.

Mr. Queen K-drama is not a regular historical drama, it has many unexpected twists that will leave you in splits. It’s a historical drama with family politics. Power and egos are always the main features of any historical dramas. How some characters later on change and play their games, you would have never thought.

Despite being a historical drama, it has ‘n’ number of funny scenes. Who would have thought a historical drama will have humorous scenes and characters. There are many characters who are supporting ones but without their funny antics and roles is not possible to watch the drama. As form of duos and trios these characters have made viewers tickled their bone. Not to forget to mention the main Queen being part of it.

From beginning to the end, this drama had many hilarious scenes, though it had some serious scenes obviously it’s a K-drama you need to have everything in it.

Court Lady Choi (Cha Chung Hwa) and Hong Yeon (Chae Seo Eun) both were loyal people who served and helped the Queen in all the situations. But Court Lady Choi’s, her way of nagging the Queen and Queen’s funny conversations with both Hong Yeon and Lady Choi are one of the main attractions of the drama. Shin Hye-Sun is the most funny thing you will see in Mr. Queen. Her dialogues, the way of talking to the other characters, especially with the King, her behavior and her funny expressions will make you laugh and also will make you fall in love with her.

One of the main funny scenes of Shin Hye-Sun with Court Lady Choi and Hong Yeon is her twerking. Check this funny video to see:

Chemistry between male and female lead

Well you will surely fall in love with Kim Jung-Hyun and Shin Hye-Sun’s chemistry. Not only their romantic chemistry but their funny scenes together are just amazing to watch. The way their characters shared emotions and love with each other will make you move.

Kim Jung-Hyun and Shin Hye-Sun’s chemistry is not only amazing to watch on-screen but off-screen as well. The way they bonded on the sets, their funny moments with each other behind the scenes are so cute to watch.

Court Lady Choi (Cha Chung Hwa) and Hong Yeon (Chae Seo Eun) both were loyal people towards the Queen in all the situations. Despite Queen’s different behavior because of the souls exchange they stayed patient and always stood with her in all the circumstances.

Even after Bong Hwan’s soul gets trapped in Queen’s body, it doesn’t make him to resist his cooking skills. He or the Queen enters the royal kitchen where he meets Royal Chef Man Bok (Kim In-Kwon). Initially the royal chef keeps on taunting her but soon later on he starts liking and respecting the Queen. Their dialogues, their love and hate relationship will make you laugh and love at the same time.

King Cheoljong’s bonding with his older brother Prince Yeongpyeong (Yoo Min-kyu) and best friend Hong Byeol-gam (Lee Jae-won) are also one of the main characters who bonded well in the drama. Both of them were support system of King Cheoljong and stood by him in all the situations.

Well, you should not miss their off-screen bonding and funny moments. Their relation with each other is not only visible on-screen, but off-screen as well.

Check here to see the funny and behind the scenes video of the casts:

This drama faced lot of controversies as some claimed they made fun of Joseon period dynasty and insulted King and Queen of the era. Some also demanded to ban the series. Despite these issues faced by the makers, the drama went on to become one of the popular Korean dramas. It is the 7th highest rated drama in Korean cable television history and has 8.8 IMDb rating as well.

It still received praises and appreciation from critics and viewers despite some people petitioning against the drama.

Mr. Queen has garnered many fans across the globe. People from other countries have praised and loved the drama a lot. Many fans globally have also demanded season 2 of the drama.

Pinkvilla is an Indian online entertainment website, that mostly posts articles and interviews of Indian actors and actresses and also sometimes post Hollywood celebrities articles. But surprisingly they interviewed one of the main actors of Mr. Queen Na In-woo who played the role of Kim Byeong-In, cousin of Queen Cheorin. Here is the video to check out *Spoiler alert* :

Why is Mr. Queen worth watching drama?

So, these are the 4 reasons why Mr. Queen K-drama should be in your watchlist. These reasons will surely convince you to watch this drama. It is entertaining, not at all boring, full of funny scenes, family politics, also interesting antagonists, bonding among the star casts and chemistry between the male and female lead are highlights of Mr. Queen. Therefore, don’t waste your time, go and watch this amazing drama.

You can also check out some amazing couples in K-dramas with great off-screen chemistry, click here 5-couples-in-k-dramas-with-amazing-off-screen-chemistry to see.

Or watch other amazing K-dramas that you should not miss in 2020 here:

4 Reasons “Squid Game” is so Successful

Which Squid Game Character Are You?