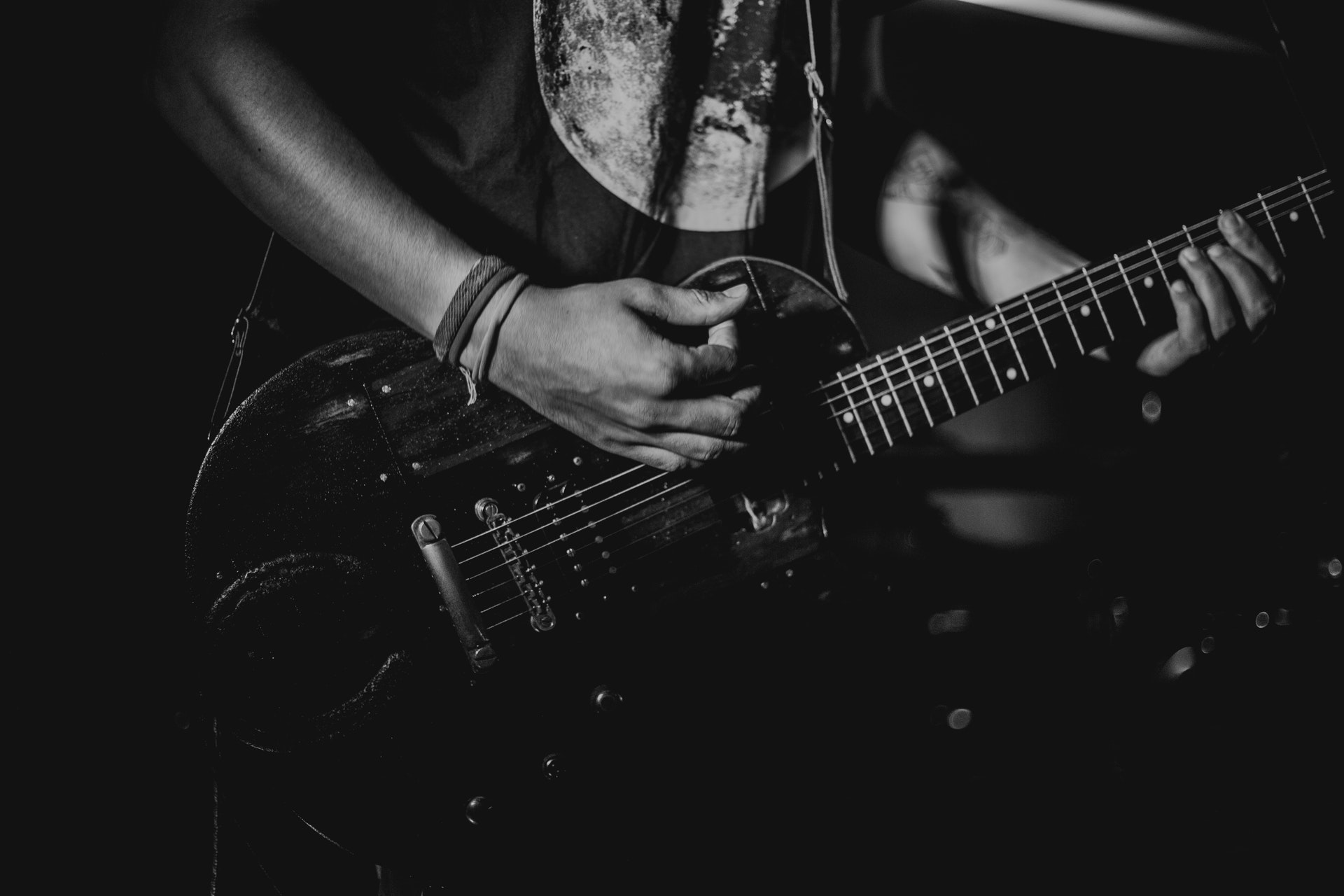 Korean music expands more than the Kpop scene. Even though it can be hard to imagine South Korea without Kpop music, Korea has a rock music scene we hardly hear of and know about among the k wave.

We may be familiar with western rock music but Korean rock bands are paving the wave for new sounds by intertwining genres. They are breaking the molds of genres to make their own infusion of rock music. Korean rock music thrives in their underground scene home to many other rock genres.

Although they have a thriving underground scene, rock music has not been part of Korean culture as long as it has been in western cultures. So when was it introduced to South Korea?

South Korea was introduced to rock music by western military soldiers during the Korean war.  During the 1950s, rock music was popular to hear and soldiers were no different in wanting to be entertained with rock music overseas. Koreans would learn and play rock music to entertain the soldiers as a source of making a living.

Koreans would audition to play for soldiers, some would succeed like Shin Joong-Hyun while others would not. Shin Joong-Hyun was considered the “godfather of rock” revolutionizing music but also creating the first rock band, Add-4.  He was influenced by American jazz and psychedelic music which he would incorporate into his own music.

However, the rock era would come to halt during Park Chung-Hees’ regime that censored and controlled much of Korean’s culture and lifestyle.Under the new regime and Shin Joong-Hyun censorship and being blacklisted, changed the rock music scene.

After the end of Chung-Hees’ regime and the reopening of the borders to the world, Korea would have decades of rock music to catch up on. As Korea’s defining sound was becoming pop, rock music was defining their own underground indie rock scene in Hongdae, the prominent arts district of Seoul. Although rock music was making a comeback, it has a smaller following and low budget industry in Korea than in western culture. Often rock music goes unheard amidst the kpop genre Korea has become known for to other foreigners.

Check out the various rock genres Korea has to offer.

Korea’s underground rock music scene began with indie rock music. Korea’s most prominent genre to flourish and conquer in Hongdae where we can expect to see many more rock bands playing.

Hyukoh began to create a following while playing in Hongdae before launching to fame when they appeared on the show Infinite Challenge.  They have toured the United States playing their music and, even though they have songs in English, they refuse to sign with an American label and conform to the mindset of the Korean music industry. Hyukoh’s sounds have a melancholy sound with hard guitar sounds. Their lead guitarist can speak Korean, English and Chinese fluently allowing them to sing in different languages.

Lead guitarist and vocalist Taehyun Nam left idol group WINNER to seek his own pursuits in music by forming a band of his own. Having more of an artistic freedom, South Club has older rock sounds that influence the foundation for their music ranging from blues, indie and early punk sounds.

Nell has been around since 1999 making them veterans of rock music. They gain recognition after their fourth album where they participated in musical festivals in Korea and concerts in the United States. Nell has been recognized for their indie, psychedelic sounds

The Black Skirts have an airy sound to their music that has the influences of sounds of the 1960’s rock psychedelic genre. Their songs are lengthy featuring long instrumental solos and modal melodies. They released a single last year, “Someday” features in the OST of Romance Is A Bonus Book.

Although Guckkasten experiments with their sounds, they have been classified as psychedelic rock. They have disjunctive song structures mixed with electronic synthesizers and effects.

Alternative rock is defined differently in Korean, where we can expect different ranges of sound and genres getting together to create the alternative genre. We can hear sounds ranging from heavy metal to a soft rock.

Bursters formed in 2014, have a hard metalcore sound which has ranged from screamo style to hard rock. They have gained recognition in Japan and even toured in the United Kingdom.

Inlayer has a metal core sound to their playing, and shocking enough, they only play their instruments. They don’t sing which classifies them as an instrumental quartet band.

Vassline formed in 1996 and have continued to play making them veterans of metal and harcore rock music. They have a hard sound to their instruments with screamo vocal style.

Skusacks has led the punk rock movement in South Korea after Rux, another punk rock band, stepped down. Skasucks sounds has a mixture of  genres from ska music to punk rock to create the ska punk sound.

Cherry Filter is one of the few bands who has a woman. Not common to see female rock bands, Cherry Filter has fun with their sound by incorporating punk and early 2000s rock.

Drug Restaurant formed in 2015, gaining recognition for their music in the release of their song “Mistake”. They have a punk rock sound that can showcase their skills but also reveal a softer sound. In 2019, the band disbanded due to scandals.

A genre  more accepted in Korea has been rap core rock which incorporates rap into the rock sound. Often associated with the hardcore sounds, rap rock in Korea has catchy melodies.

N.Flying first debuted in Japan 2013 before debuting in South Korea. They have gone through different members and comebacks before making a hit with their song “Rooftop”. Their sound has catchy sounds mixed with rap lines and singing.

Debuted in 2004 as a rock band with alternative guitar sounds and rap lines to their songs. TraxX has expanded their sound from rap-rock to becoming an EDM rock band. Despite disbanding in 2019, their music can still be heard.

Experimental rock has been more welcoming in the rock scene in South Korea. We can expect experimental rock to have bands that can try and add different sounds, arrangements, and combining genres with others to their music.

WETTER debuted in 2016, even though they are a young band, their sound has caught the attention of underground experimental bands. Their sound plays with different sound effects, guitar synthesizing sounds, and garage sounds.

Known to be in the math rock genre, it was a movement created in Chicago, it is more seen in Korea where the sounds are rearranged on the angles and complex arrangements and patterns we find in math. Cotoba’s sound has atypical rhythmic structures and the drums and electric guitars are their dominant sound.

Lucy made their debut this year 2020 despite having played in 2019. Their sound has soft pop sounds with the distinct sound of the violin which makes them have their own sound unique to their individualism.

CNBLUE has the groovy, pop sounds that dominate their songs that are upbeat. Aside from making pop rock music, they dress draper for the occasion.

The Rose grew an audience in the underground indie rock scene while busking which made them popular. Their sound has soft, pop rock and have become known for their strong ballads.

IZ made their debut in 2017 with a mini album which introduced their pop sound with a mixture of hard pop rock and electronic tunes.

Onewe was formerly known as MAS before debuting again in 2019 under their new name. Their main sound has been dominated by the pop rock genre, however, they incorporate rap lines, alternative and  electronic sounds.

Another form of pop rock genre is Kpop rock associated with the mainstream pop idol music and Korea’s music industry.  Kpop rock bands have more recognition and have clean sounds to their songs.

Day 6 made their debut in 2015, and have since become more noticed by mainstream music. They have a pop sound to their music influenced by 80’s punk pop sounds and sync pop sounds.

Although it can be hard to recognize Jannabi as a kpop rock, their sound lies more on the retro pop sounds. Despite the scandals that follow the band, theri music has soothing and relaxing sounds to nod our heads to.

F.T. Island made their debut in 2007 introducing their pop sound music. Despite starting with a kpop sound to their music, they went through a transition of sound having more alternative and hard rock in their music in their later years.

These are just a few of Korea’s rock bands who are paving the way for more rock bands to flourish underground. Even though Korea has been catching up on rock music, Korean rock bands have created their own sound and genres out of the western molds of rock music.

Even though Korea’s rock music scene has a low key, underground base, they have thrived in the Hongdae district of Seoul. Seoul has hidden gems we can explore and see rock bands rocking that Korea’s main defining music can’t gain us access to.

So tell us, what korean rock band is more your scene?

“The Penthouse: War in Life”: A K-Drama Worth Watching